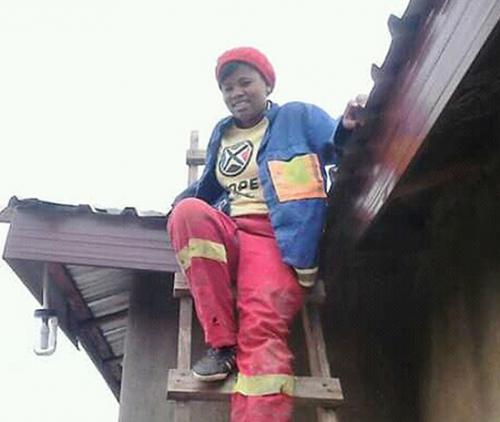 Climbing roofs is not a men's only job, women can also do it.

Sefilara climbs her way to the top of the roofs

Who said climbing a stepladder to the top of a house roof is for men only?

A young woman from Thohoyandou is fast dispelling the myth, and she climbs up with ease and repairs leaking roofs.

The 30-year-old Ms Kabelo Sefilara, who originally hails from Madombidzha Zone 2 outside Louis Trichardt and works for a local restaurant in Thohoyandou, says she fell in love with fixing after seeing a leaking roof at home.

The humble woman, who now resides in Thohoyandou, is fast becoming a household name in areas around the area, where she addresses leaking roofs better than her male competitors. She has also become a classic example that there are no longer jobs confined to a gender and that women can do these different jobs better if they embrace opportunities that come their way.

"Fixing roofs is something that I love, even though I never did it at school. I am a commercial student but have come to realize that there is no such thing called a job for men or women. For a person to survive and beat poverty, we must try something different and never let gender kill our dreams or something that one loves.”

Sefilara further indicated that people had different thoughts about women who did difficult jobs and they could sometimes talk negatively about it. "This is where I draw courage and I don't worry about it. I love my job and I will be happy if people give me more support. My advice to other women is that they should not let their lives get stuck by categorizing job opportunities.”