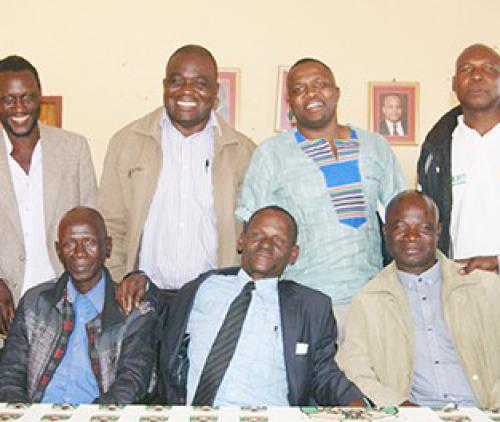 Representatives from Musina Municipality and the Mutele Traditional Council, captured during the service-delivery meeting at Ha-Mutele.

“As community leaders, we don’t impose anything to our people. We consult and seek inputs from people, so that they can also form part of the decision-making process of the municipality. I am also thankful for the support from traditional leaders, stakeholders and community members because we need each other to deliver quality services.”

Mafela told the audience that the municipality hosted service-delivery interaction sessions with various stakeholders timeously. “This is in line with the government’s Batho Pele principles, which compel us to put people first.  The wealth of the municipality is our people, and we have to make sure that they are treated with dignity and affection. That is why we decided to put everything aside to come and attend this important meeting here today.”

Mafela’s sentiments were echoed by the Speaker of Musina Municipality, Cllr Gilbert Netshisaulu. He said the political and management teams of the municipality visited all the areas to compile reports on people’s complaints and compliments. “It is good that we keep on receiving positive feedback from members of the community. Where there are gaps, we make sure that they are filled as urgently as possible. This also helps us to address service delivery backlogs effectively by involving the affected community members and stakeholders.”

Netshisaulu said although much had been achieved, some challenges remained that needed to be addressed. “We are engaging with the relevant authorities to make sure that challenges are resolved once and for all. Those which are not our competency will be forwarded to the relevant departments and stakeholders for attention.”

The chairperson of the Mutele Traditional Council, Mr Muthivhelo Nemadimbo, commended the delegation from Musina Municipality for attending the meeting. Issues that were discussed during the meeting included provision of reliable water supply, grading the local roads, shortage of houses and crime, among others.