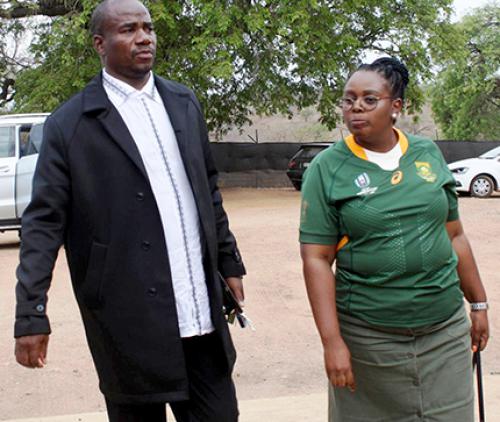 Thovhele Nkhaneni Ramovha (left) walks alongside the Minister of Tourism, Nkhensani Kubayi-Ngubane, during her arrival at the Mulenzhe Tribal Offices earlier this month.

Area set aside for development of Nandoni Golf Estate

“We have set aside over six hectares of land in Mulenzhe for the development of the Nandoni Golf Estate, which we hope will be second to none in the district and will help create jobs in the tourism sector,” said Thovhele Nkhaneni Ramovha.

Ramovha was speaking during the visit by the Minister of Tourism, Ms Nkhensani Kubayi-Ngubane, to the Mulenzhe communities earlier this month. Minister Kubayi-Ngubane was on a fact-finding mission and visited the area to advise communities on how best they can promote domestic tourism.

According to Kubayi-Ngubane, the Limpopo Province has tourism potential that will help to create more jobs. She also talked about the Musina-Makhado Special Economic Zone (SEZ) that will do the same.

Thovhele Ramovha said that they wanted to build five-star hotels, aimed at events such as the annual Royal Heritage Festival that is celebrated in September. “Some of our visitors are forced to do their hotel booking outside Thohoyandou, as many hotels are fully booked,” said Ramovha.

According to Ramovha, they also have plans to upgrade the former Mphephu airport in Vuwani, which will help the district in attracting more international visitors.