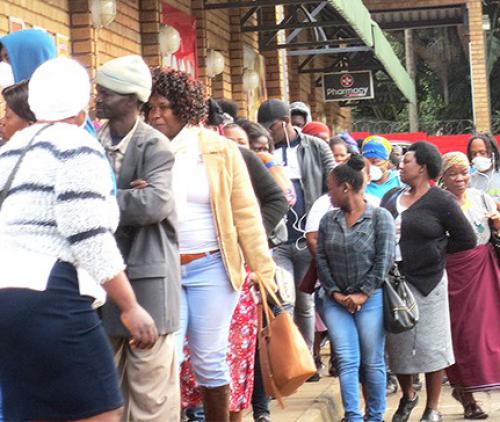 At Super Spar in Louis Trichardt, shoppers also queued with no social distancing maintained. Few had gloves and masks

After taking note that hundreds of the citizens of South Africa live on social grants, the Minister of Transport, Mr Fikile Mbalula, relaxed some of the Covid-19 regulations to allow the vulnerable access to their money.

Among the relaxed regulations is the times that minibus taxis and buses can operate and the number of passengers they can carry per load.

As from 30 March to 2 April, Louis Trichardt was characterised by long, winding queues. They were mostly Sassa beneficiaries. Notably, most of them had no gloves or masks. Some of them said stocks had run out before they could get some, while others said that they could not find any in their remote areas. A few said they could not afford the cost or did not know where to buy the required protective equipment.

One of the Covid-19 regulations is that people should observe a social distance of almost two metres. Is this observed during the Sassa week?

A quick survey led us to believe the social distance is not really considered by people queuing for money or buying groceries.

Limpopo Mirror went around queues at ATMS, banks and shops, trying to determine whether social distancing mattered to the people and why people did not observe the distance.

“There is no way I could go back home without nappies for my little child as well as food stuff. I come from the area around Elim and thought of coming to Louis Trichardt, believing there would be fewer people. In fact, I tried in vain yesterday to buy groceries at Elim Mall. Today I must get the goods,” said a 33-year-old lady, who had arrived in Louis Trichardt by 06:00. She had joined the queue but was far from the Shoprite entrance. Asked whether she was not aware of the distance required between people, she emphasised that she was aware of the requirement, “but cannot help it. Everyone is jostling for a chance to buy, because after Friday it will be difficult for us to get in town”.

She looked tired of standing in one place.

Another 32-year-old man said: “It seems people are not aware how this disease spreads. Some are even not sure whether there is such a disease. I am sure more should have been done by the government to make people aware of this disease. Now people think the social distance should only be observed when one is inside a shop.”

Early-morning shoppers jostling for a chance to buy food at Shoprite in Louis Trichardt. Few had gloves or face masks.

Shoppers queuing to get a chance to shop at Check U.