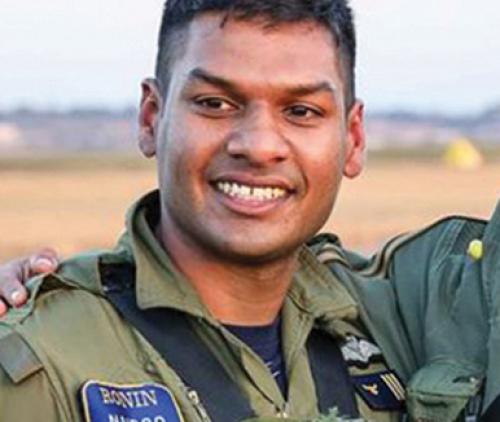 The South African Air Force (SAAF) is getting two more pilots for its Gripen fighters, including the first South African-born Indian Gripen pilot.

On 4 May, Major Jabulani Jerry Mabona (callsign Cyrax), completed his first solo flight in the Gripen. He was followed the next day by Captain Klyde Ross Naidoo, callsign Ronin.

Naidoo grew up in Reservoir Hills in Durban but moved to Gauteng in 2000 and began basic military training in January 2011 at the SAAF gym in Hoedspruit. After a six-month course at the SAAF College in Pretoria, he spent a year studying technology and defence management at the SA Military Academy in Saldanha. He then began flight training on the PC-7 at Air Force Base Langebaan and graduated as a pilot in the SAAF in December 2014.

Between 2015 and 2016, Naidoo studied for his technology and defence management degree, and in April 2016 he was transferred to 85 Combat Flying School at AFB Makhado, where he began combat training, qualifying on the Hawk, and completed his flight leader’s course in November 2019. He was subsequently transferred to 2 Squadron at AFB Makhado.

Naidoo is not the first South African Indian SAAF crewmember to fly the Gripen, as Lieutenant Koobendra ‘Kevin’ Chetty (Saffron) qualified as a strike navigator on the Gripen back in 2010.

The SAAF now has a dozen active or reserve pilots for its fleet of 17 single-seat Gripen C and nine two-seat Gripen D jets, although nearly half the fleet is in rotational storage.

Training to be a Gripen pilot, from recruitment to first solo flight on the fighter, takes about six-and-a-half years. This includes basic military training (three months), officers forming course (a further three months), the military academy (one year) and basic pilot training (one year). The latter includes 180 hours on the PC-7. Next follows some 390 hours on the BAE Systems Mk 120 Hawk at 85 Combat Flying School before posting to 2 Squadron where conversion to the Gripen takes place, starting with six weeks in the classroom, followed by 70 hours on the Squadron Level Mission Trainer (a flight simulator) and a further 70 hours on the aircraft. Both periods include 30 hours of conversion training, 20 hours of air warfare training and 20 hours of surface warfare training. It then takes a further six sorties to solo. (Article and photo courtesy of defenceWeb.co.za. To visit defenceWeb click HERE).