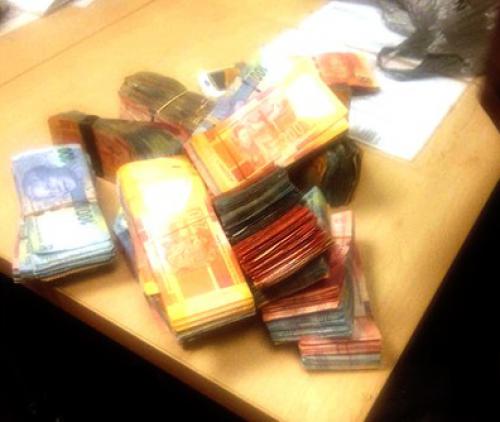 The R308 250 that was found inside the man’s vehicle. Photo: Limpopo SAPS.

The Limpopo police have arrested a 30-year-old suspect on a charge of money laundering during an intelligence driven operation that was jointly conducted by members of the police and SANDF along the Malaladrift road in the Musina policing area on 21 May.

“The operation was conducted soon after information was received about a man possessing a large amount of cash, driving a metallic brown Toyota bakkie in the area,” said provincial police spokesperson Brigadier Motlafela Mojapelo.

A description of the vehicle was given to authorities. The bakkie was soon afterwards spotted and the driver ordered to stop. Police and members of the defence force then thoroughly searched the vehicle and found South African bank notes amounting to R308 250. “The suspect was immediately apprehended after failing to disclose the origin of the money. He is expected to appear before the Musina magistrate court soon facing a charge of money laundering. Police investigations are continuing,” said Mojapelo.