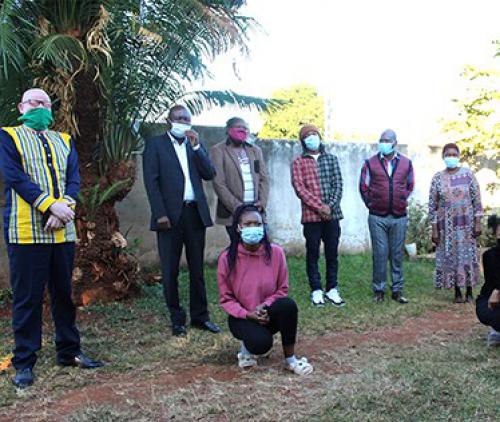 In our photo, which was taken during the mayoral visit to the Mukwevho family, is, second from left, Vhembe Executive Mayor Dowelani Nenguda, third from left is Colbert Mukwevho and third from right is Chief Livhuwani Matsila. Also in the photograph are artists and family members.

The wife of musician and reggae legend Colbert Mukwevho, Ms Julia Mukwevho (54), died in the Siloam Hospital after a short illness a fortnight ago.

She was buried on Thursday at the Mbaleni graveyard.

The family spokesperson, Ms Tendani Mukwevho, described, Julia as “an angel who brought up her children with love and affection and supported her husband in his music career”. She added that Julia had served the Lord and that her death left a big void in the family. “She was everything to us and she was our main source of inspiration,” she said.

"We will always remember her for her hard work, commitment and dedication," she said.

The executive mayor of Vhembe District Municipality, Cllr Dowelani Nenguda, who visited the family on Monday, said that although the family, friends and Vhembe residents had accepted what had happened, forgetting that her death had robbed the family and community of an energetic leader who had been full of zeal and courage would be difficult. He described Mukwevho as a brave woman who was loyal to the community and to her family.

In a message of condolence from family friend Chief Livhuwani Matsila, he said that he was deeply saddened and shocked "by the untimely death of an honest, competent and dependable servant of the people." He described Mukwevho as "an organic intellectual who will be sorely missed".