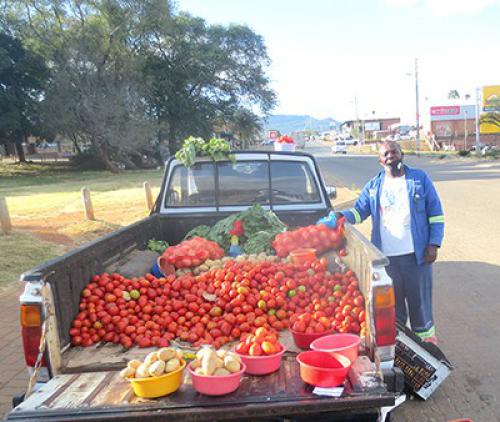 Norris Phaswana, a fruit and vegetable vendor along Kruger Street, is pleading with the traffic police to leave him to operate his business at his usual spot.

Town's street vendors must stick to their spots

“What crime have I committed now? This is my way of earning a living,” said Norris Phaswana, a fruit and vegetable vendor along Kruger Street in Louis Trichardt.

“From nowhere, some weeks ago, a traffic cop approached me and told me to change my vending place because the officer claimed I was disturbing buses dropping commuters. This surprised me. How come I have been doing this for years and there was no complaint, neither from commuters nor from bus drivers? In fact, most of my customers are the commuters from these buses.

He said that he usually supplied the commuters and other customers with fruit and vegetables, and then they paid him at the end of the month. “This is really a mutual understanding between me and my customers,” said Phaswana.

Makhado Municipality’s spokesperson, Mr Louis Bobodi, said every street vendor had a specific area allocated for trading. “The area that Phaswana is operating from is designated as a bus stop. Phaswana is aware of his actual place of operation, in the same street, next to Limpopo Dairy’s outlet,” said Bobodi. He added that he [Phaswana] must relocate to his rightful place for which he had a permit.

Leaving his spot for another one is not acceptable to Phaswana. Showing Limpopo Mirror his lockdown permit that he obtained early during level 4 of the lockdown, Phaswana said, “I ran a serious loss when the lockdown kicked in. Most of us were unaware, and as we sell perishables, they all went rotten. Now they [the traffic police] again want to disturb me. I will lose all my customers once I leave this place.”

Phaswana is pleading with the traffic cops to leave him to carry on with his business at the usual place. “This is the only way I can put food on the table,” he said.