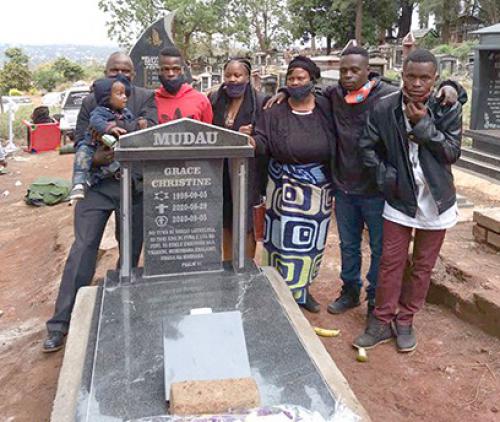 Family members photographed at the tombstone.

Ms Grace Mudau (23), who was stabbed to death at Mutsha a fortnight ago, was buried during an emotional funeral at Mutsha-Khwekhwe on Saturday.

She was allegedly strangled and stabbed in the head with a sharp object by her boyfriend. Her lifeless body was discovered by community members.

“The pain we experience as a family is more than words can express,” said a family representative, Mr Colbert Mudau. “We thank the community for their support. Your presence and contributions made us strong, although we know the tragedy will ring in our minds for the rest of our lives,” he said.

Mudau thanked all businesses, donors, and community members who, upon hearing of the plight of the family, came to their rescue and ensured a dignified funeral.

The chairperson of Munna Ndin Nyi, Mr Bardwell Mufunwaini, expressed his condolences to the family. He called on the police to act decisively against criminals “who have taken the village hostage, or members of the community will take the law into their own hands”.

The Limpopo MEC for Transport and Community Safety, Ms Mavhungu Lerule-Ramakhanya, said that the community had had enough of killings. “We are doing all we can to make people aware of the crimes that are happening in their midst. The police are doing their best to apprehend the criminals, but we seem to be fighting a losing battle, because people prefer to keep quiet.”

She told mourners not to keep quiet in the face of the ongoing onslaught against women and children. She said that the nature of Grace’s death and the way she had been killed had made her put everything aside to come and be with the family and to give them support. “We are here to give a helping hand and urge you to seek strength from God, who is our Saviour,” she said.

The suspect, Kenneth Mphaphuli (24), appeared in the Vuwani Magistrate's Court on Friday, and his case was postponed to 25 September for a formal bail application.