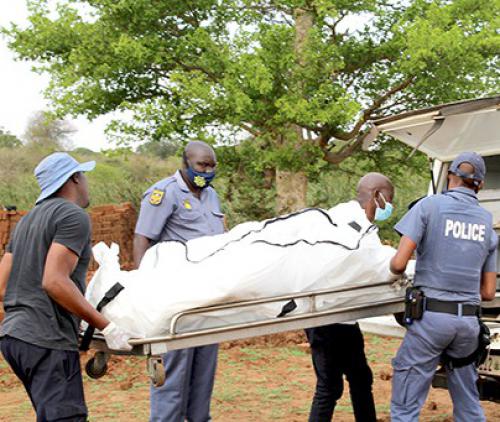 The forensic pathologists and SAPS officials carry the body of Oscar Mnisi, who was found floating in Nandoni Dam last Friday.

The family of a teenager whose body was found floating in the Nandoni Dam on Friday are still battling with more questions than they can find answers for.

Oscar Mnisi (16), a Grade 10 learner from Phaswana Secondary school near Sibasa, was last seen in the company of two of his friends.

His father, Mr Robert Mudau, told Limpopo Mirror that nobody really knew what had happened to Oscar. Mudau, who is staying at Miluwani village (not with Oscar and his mother) was still shocked by the death of his son.

“Although I was not staying with him, his death robbed me off a son,” he said. According to Mudau, the boy was apparently killed, and his body was later dumped in the water. When the body was retrieved from the water, stab wounds were apparently visible.

Limpopo police spokesperson Brigadier Motlafela Mojapelo confirmed the incident and said the Thohoyandou police were investigating the death of the young man. He said the circumstances around his death were not clear and the police were following up on leads.

Mnisi will be buried on Saturday at Miluwani village.

The deceased, Oscar Mnisi (16), whose body was found floating in the Nandoni Dam on Friday. Photo supplied.