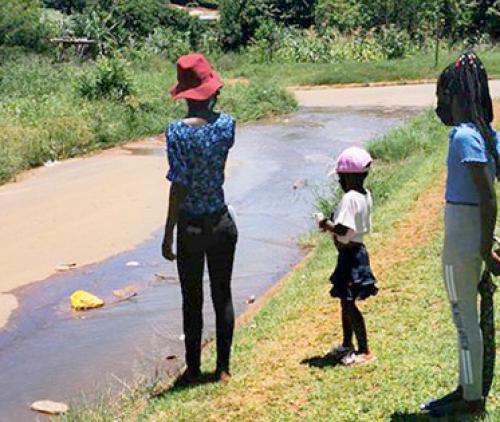 Young people look at the sewage that flows down the streets of Shayandima village.

The residential area at Shayandima is enveloped in an unbearable stink as raw sewage has been flowing through the streets for more than two months now. The Thulamela Municipality appears to be unable - or just unwilling - to attend to the problem.

On visiting Shayandima Zone 3, Limpopo Mirror’s reporter was struck by the awful smell that greeted him on arrival. Residents say that they are now used to navigating through the streams of raw sewage that bubble out of blocked and burst pipes, as they go about their daily business. The smelly waste flows down the streets, into residents’ yards and homes, and ends up in the local river.

Residents claim they have reported the matter to the Thulamela Municipality and now accuse them of not taking their grievances seriously.

One of the residents, Mr Matshaya Mathivha, spoke about their fear of contracting diseases, including cholera. He said that the past three months had been among the most frustrating in his life. “This is unacceptable and very frustrating. It’s the worst thing that ever happened to us. It's even difficult to open my mouth to talk about this, due to the smell,” he said. “It becomes worse when it rains. We struggle to even walk in the streets.”

Residents believe that the smell of the sewage alone is a health hazard to them and their children. “It's a struggle to eat. I feel like vomiting every time I try to eat,” Mathivha said. He blamed the municipality for failing them. Mathivha explained that, during the summer rains, the trenches overflowed, and the sewage ended up in residents’ homes. “It was a total mess!” he said. “I am confused now. This lack of service delivery tells me to open the eyes of my mind. It’s hard for us in Shayandima.”

Vhembe District Municipality spokesperson Mr Matodzi Ralushai said that the municipality had appointed a service provider who was working on the system.