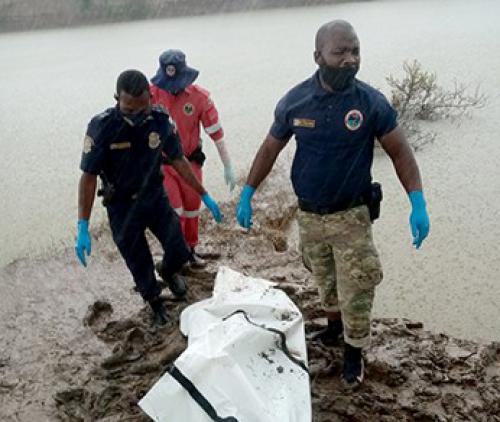 Police divers retrieve the body of Mr Godfrey Neshunzhi, who had drowned in the Muengedzi River in Zamenkomste.

The Muengedzi River in Zamenkomste has claimed the life of a local man. The body of Mr Godfrey Neshunzhi (52) was found floating in the water on 13 February by members of the community. When police divers arrived at the scene, they could do little more than retrieve the body.

The community members are still in shock about the incident. Family spokesperson Mr Khathutshelo Neshunzhi said that Godfrey had left the house on 11 February to go to Tshikwarani Post Office to collect his R350 Covid-19 relief fund money, but he had never returned home. “When his body was found floating in the river, we went there and identified his clothes, which were lying next to the river,” he said.

Neshunzhi said that Godfrey’s untimely death had left his family devastated and that they still found coming to terms with what had happened difficult. “We take solace in the fact that he had graced this earth and touched our lives with his love and beautiful smile,” said Neshunzhi. “We will miss him. We also remember him as a good man who loved people.”

A community leader in the area, Mr Norman Mabila, expressed his condolences to the family and warned children not to play in or next to the water. He called upon parents to watch out as all the rivers and dams are full to capacity after the recent heavy rains.

Police spokesperson Brig Motlafela Mojapelo said that the police had opened an inquest docket and that the incident was being investigated. He also appealed to parents to take care of their children and for children to avoid playing in rivers and dams. He said that most of the smaller dams, streams and rivers had filled up considerably after the good rains and warned that children could drown when the depth of dams and the strength of currents in the rivers were misjudged.

He said that they expected more children would want to go for a swim to cool off during the hot weather, but although they normally swam in groups, many of the young people did not know how to swim. The police urged communities to make sure that an adult who knows how to swim accompanies children when they venture into dams or rivers.