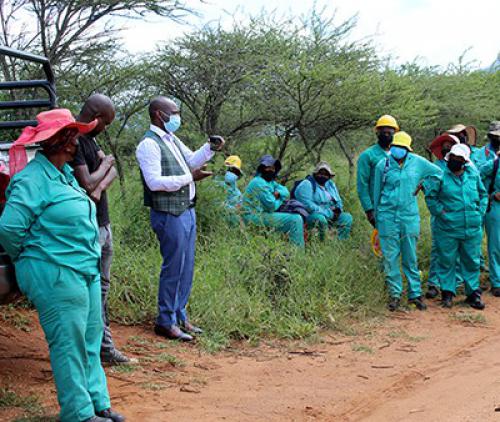 Workers from poor areas who are clearing the bush around the Kutama area have asked Vhamusanda Livhuwani Matsila of the Radzambo Cultural Foundation to apply for more funding that can create further employment opportunities.

The workers were employed to do bush-clearing as part of a R6 million project that was funded in 2018 by the Department of Environmental Affairs. In total, 55 community members from poor families around eight villages were employed for a period of three years. The term will expire in August this year.

Matsila is known for his prominent role in job-creation and poverty-eradication projects in rural communities. Around 500 women and men managed to find employment at the different projects in the area. The projects include wood carving and sculptures that range from wooden drums, walking sticks and spherical calabashes to spoons and other wooden decorative ornaments. Agricultural projects include cattle-, goat-, sheep- and chicken farming, making clay cooking pots and bush-clearing.

Matsila said that his institution succeeded in dealing with inherited problems of inequality, lack of employment and poverty, and had great potential to transform the lives of many of the poor and vulnerable people.

He has also embarked on a campaign to help other traditional leaders on issues of development. “As traditional leaders, we are tasked with looking after our subjects, and we can achieve this if we assist each other. For me, rural development has become a passion that I will preach wherever I go.”

He undertook a site visit to the Kutama project on 18 March to check on the development and the challenges workers are faced with and was very impressed with the progress. Matsila said he was humbled that the journey they had started together had finally paid off.

After the workers’ appeal to him to apply for more funding on the project, he promised to do all he can to secure their income.

According to Ms Marvellous Sivhaga, life had been difficult before, but thanks to the project, things were now running smoothly. “We want to encourage other women to emulate what we are doing,” she said. “When we joined the project, we did not know that one day we would find ourselves being able to provide for our families. Things were difficult when we started, but through hard work and commitment, we managed to make the project sustainable.” She added that her children were still at school and that they solely depended on the income from the project.