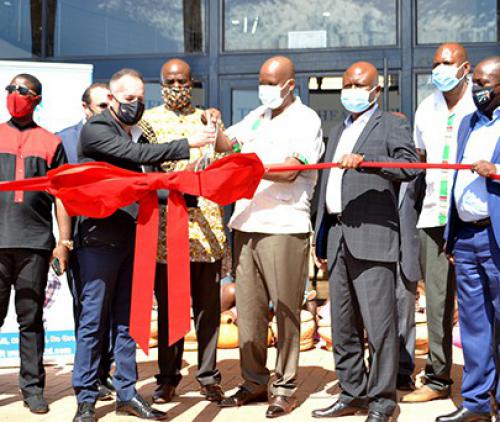 The managing director of the new National Health Centre (NHC) in Thohoyandou, Mr Hermann Kohloffel (second from left) is helped by traditional leader Khosikhulu Toni Mphephu Ramabulana to cut the ribbon during the official opening ceremony of the centre, while other traditional leaders, as well as the executive mayor of the Vhembe District, Cllr Dowelani Nenguda, look on.

Cllr Nenguda said that the opening of the centre was another milestone and strategic investment by the private sector in the Vhembe District. “We are pleased to acknowledge and witness the role the private sector is playing in speeding up service delivery and the provision of quality health care to our people. The opening of this private medical facility comes at an opportune time when our county and district are fighting the Covid-19 pandemic.”

Nenguda said that the health facilities in the district could not cope with the medical demand during the second wave of the pandemic, and that they were optimistic that the NHC would be able to contribute by adding a few more available beds. This centre, he said, must also make provision for specialised medical care, which was the most needed service among local people.

The managing director of the NHC Thohoyandou, Mr Herman Kohloffel, said that the opening of the centre marked the start of something new for them, but at the same time continued a journey that had already started 26 years ago during a meeting by 18 very concerned family practitioners, who formed an Independent Practitioners Association (IPA) in the Northern Suburbs of Johannesburg.

The IPA members at the time were worried not only about dwindling fees but a new threat from the USA called managed care, and while everyone else was concerned about the transition of the New South Africa, the IPA was thinking far into the future about the wellbeing of their patients and their immediate community members.

According to Kohloffel, the second phase of the centre – adding a hospital - will be completed by early 2022.

Mphephu Ramabulana said that he was honoured to witness this great and important development, which would surely help the local communities. “We congratulate the partnership between the IPA and the government in building this health facility. We (traditional leaders) are the custodians of the local communities and have more land which can be used. Developers are urged to make use of this land for development,” he said.

Mphephu Ramabulana also warned communities to refrain from vandalizing the facilities, even if they were worried about poor service delivery.