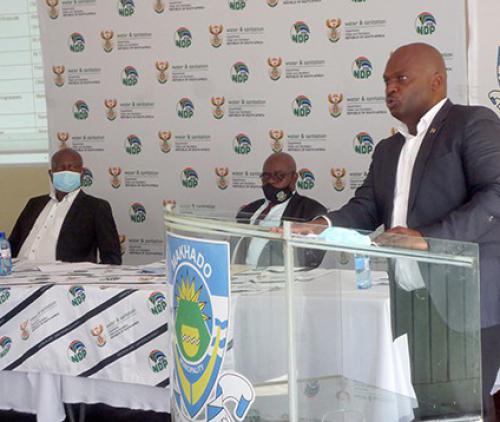 Ndivhuwo Mabaya, adviser to the Minister of Human Settlement, Water and Sanitation, and a team from the National Department visited the district for a stakeholders consultation. Photo: Bernard Chiguvare.

VDM mayor optimistic that water projects will be completed

The executive mayor of Vhembe, Cllr Dowelani Nenguda, said that he was optimistic that water and human settlement projects in the district would soon be completed. This follows a consultation held with stakeholders last week at the Makhado Show Grounds with the advisor of the Minister of the Department of Human Settlement, Water and Sanitation, Ndivhuwo Mabaya, and a team from the National Department.

Mabaya explained that the engagement was to listen to the concerns of residents from Vhembe District Municipality, in preparation for the Minister of the Department of Human Settlements, Water and Sanitation, Ms Lindiwe Nonceba Sisulu’s visit to the district.

“The purpose of the meeting was to engage and share with stakeholders on the projects prioritised by the department. We also are happy to take note of what stakeholders added to our priorities,” said Mabaya. These visits will be conducted countrywide as a way of sharing information about developments and opportunities available for businesspeople, as well as job opportunities for young people.

Nenguda pleaded with the department to speed up water and housing projects in the district. “I believe that, if the Mowkop water project is completed during this financial year, people of Sinthumule-Kutama will have a consistent water supply. Sinthumule-Kutama residents depend on this water project. The project has been there for a long time; therefore we encourage the department to speed up the process,” said Nenguda.

He also requested stakeholders at the meeting to inform communities to be patient as the district is now rolling out the bulk infrastructure distribution plan, which will be augmented by boreholes.

According to Nenguda, the district is upgrading the water-purification plants at Mhinga, Xikundu, Thathe Vondo and Damani. He encouraged traditional leaders, civic structures, councillors, ward committees and members of society to advise their communities not to connect to water sources illegally, as this infringes the rights of other citizens. Nenguda also encouraged municipalities to be transparent when allocating RDP houses or building toilets for the communities.

In its presentation, the department pointed out short-, medium- and long-term interventions.

Limpopo Mirror has repeatedly reported on Musina residents’ dissatisfaction over the inconsistent water supply, and the Vhembe District Municipality’s failure to attend to their concerns. Musina residents believe that Musina Municipality can run its own water affairs.

In response to Limpopo Mirror’s enquiry, Mabaya advised Musina residents to make a proposal to the department to support their plea.

After the meeting, the department’s representatives, the executive mayor and stakeholders visited Mowkop water reservoir and the Valdezia RDP housing projects.