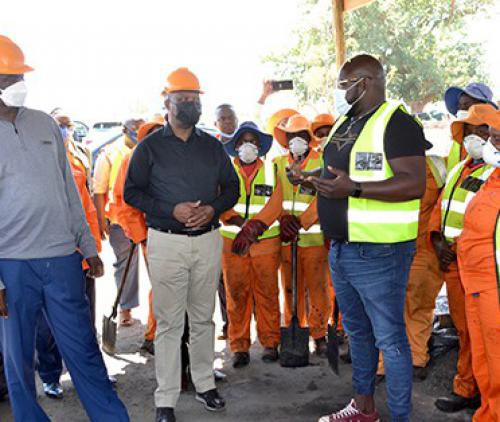 Project manager for the Mashau and Bungeni Labour-Intensive Programme Aluwani Mphanama explains to the MEC for Public Works, Roads and Infrastructure, Namane Dickson Masemola (second from left) how the programme for road maintenance will work, while the mayor of Collins Chabane Municipality, Moses Maluleke (far left), the mayor of Vhembe District Municipality, Dowelani Nenguda, and labourers involved in the project look on. Photo: Silas Nduvheni.

The MEC for Public Works, Roads and Infrastructure, Mr Namane Dickson Masemola, has urged beneficiaries of the roads maintenance and rebuilding programme (labour-intensive road revitalisation and job creation) around Mashau and Bungeni in the Collins Chabane Municipality to work hard in rebuilding the rain-damaged roads, so that motorists and communities can travel safely.

He was joined by the executive mayor of the Vhembe District Municipality, Cllr Dowelani Nenguda, Makhado Mayor Samuel Munyai and Collins Chabane Mayor Moses Maluleke at the launch of Operation Letsema Ditseleng held at Ha-Mashau on Tuesday, 14 September.

The programme was launched to address the poor state of roads in the Limpopo Province, exacerbated by the heavy rainfalls and floods at the beginning of 2021, which had been a matter of great concern for a significant period.

According to Masemola, about 240 labourers around Ha-Mashau and Bungeni areas in the Collins Chabane Municipality will benefit from the project for the next three years or so. The department will review the quality of the work piloted in different municipalities across the province.

“We want to improve the roads for our motorists and communities. So, labourers will be hard at work maintaining and repairing our damaged roads. The department and its entity, the Road Agency Limpopo (RAL), continue to invest efforts and resources in addressing the situation that we are confronted with, which concerns and affects the people of the province in various ways in their socio-economic aspect of life,” said Masemola.

While appreciative of the existing challenges and dire financial constraints, Masemola has been steadfast in exploring possible options, working with the management and relevant experts to try and turn the situation around. With such a vision in mind, the department will roll out Operation Letsema Ditseleng, which forms part of the broader national initiative of the S’hambaSonke Labour-Intensive Roads Programme, to improve the state and quality of the roads in the province whilst creating much-needed jobs for poor and unskilled people in Limpopo.