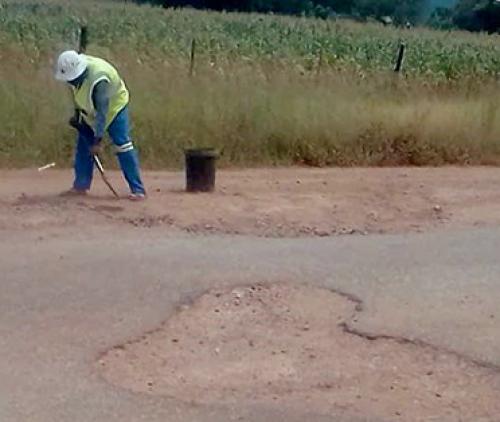 Community structures want the Department of Public Works and Infrastructure to do something about the poor condition of the D3715 Road, which is known for its dangerous potholes. Photo supplied.

'No voting if D3715 Road is not fixed,' warn community

The ongoing fight by community structures to get the government to deliver on their promise to do something about the state of the D3715 Road still seems to be falling on deaf ears.

The Sinthumule-Kutama Concerned Group (formerly known as the Sinthumule-Kutama Crisis Committee), the Dzanani Taxi Association and the Kutama Business Forum held a briefing last Friday where the MEC for Public Works and Infrastructure was called on to meet with them urgently regarding this issue.

“We are not going to close voting registration stations in our area, but if the Limpopo Department of Public Works and Infrastructure does not heed our call, there will not be any voting from anyone in this area,” said Elijah Liremi, a member of the Sinthumule-Kutama Concerned Group.

To date, many innocent lives have already been lost on the D3715 Road because of its poor and potholed condition. This is also not the first time that communities have raised concerns about the state of this road. Last year (2020), hundreds of people, led by the Zoutpansberg Community Development Forum, marched to the Makhado Municipality to protest about the road and other problems. Earlier this year, another march to the Makhado Municipality about the state of the same road took place.

“When will they listen to us? This matter involves the lives of our people,” the structures say.

The Makhado mayor urged the Kutama-Sinthumule Concerned Group to be patient and promised to look into the issue. But residents are not satisfied with this repeated promise anymore. “We call on all Kutama-Sinthumule residents not to go and vote if the D3715 Road is not fixed by 1 October 2021. We will shut down all voting stations in our area on voting day (1 November 2021),” the community structures warned, and further urged motorists not to renew their driving licence discs, should the department fail to attend urgently to the issue at hand.

The community structures gave the Limpopo Department of Public Works seven days to meet with them.

In response to this paper’s enquiry whether the department would meet with the structures, the spokesperson for the Limpopo Department of Public Works and Infrastructure, Joe Seabi, confirmed that MEC Namane Dickson Masemola had invited them to a meeting on Thursday, 23 September 2021.

“We are aware of the state of the road. The MEC has been to the road before. At the time, the complaint was about both the D3715 and D959 Roads, which had been largely rehabilitated, and a solution has been prepared for D3715,” Seabi said. “We urge people to vote and exercise their democratic rights, whilst respecting other people’s rights in the process. The roads have been part of our priorities for rehabilitation and the D3715 Road will also be attended to.”