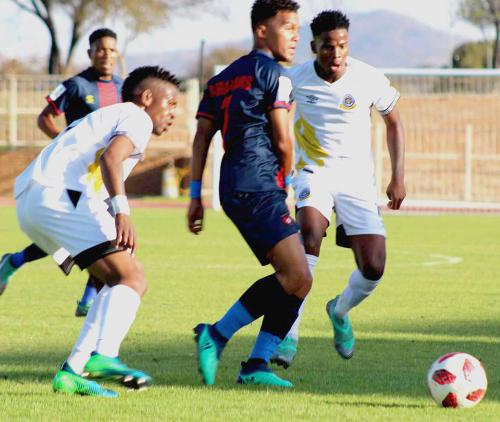 TTM’s Nhlanhla Mgaga (left) and Khunadi Nkoana (right) and Zairon Abrahams of Galaxy are focused on the loose ball.

The visitors from Siyabuswa in Mpumalanga looked hopeless in the first 20 minutes of the game and only gained momentum towards the end of the first half.

Realizing that it was difficult for them to break TTM’s rock-solid wall, the Galaxy’s technical team effected the first change to their starting 11 only 14 minutes into the game. Mfundo Phungwayo made way for Siyabonga Khumalo.

Khumalo formed a good combination with Johannes Mashao in the middle of the park, but the defenders of TTM, Carlington Nyadombo and Tshepo Makgoga, refused to allow strangers within their territory.

The Pretoria-born referee, Mr Cheslin Plaatjies, flashed the first yellow card in the 19th minute. Terrence Mashego of Galaxy found himself on the wrong side of the football laws when he tackled Patrick Meso the rough way.

The important goal that earned the three match points for TTM was scored by Edward Manqele. He gave the ball the final touch after Onyedikachi Ononogbu dished a square pass from the left corner.

Galaxy approached the last half with aggression. What could have been their equalizing goal in the 57th minute turned into nightmare when TTM’s keeper, Tshepo Ramaele, palmed Zairon Abrahams’s half volley away for a corner kick.

TTM strengthened their striking force by introducing Khotso Chabeli and Aluwani “Killer” Nedzamba for Edward Manqele and David Zulu respectively. Aubass Bathusi of Galaxy was reprimanded with a card after tackling Nhlanhla Mgaga from behind.

“We have lost to a better team,” said the coach of Galaxy, Mr Vusi Mkhathwa, in an interview after the game.