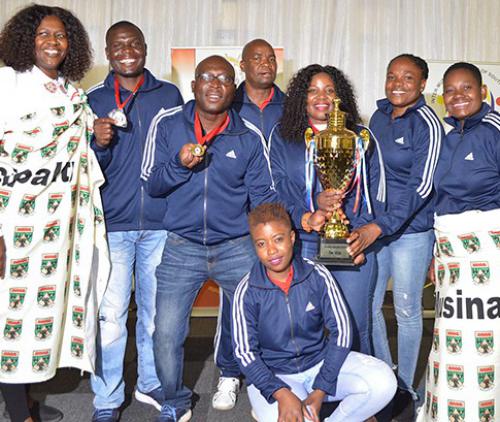 The Musina Municipality's tennis team is counted among the best of the Southern African municipal teams. The hardworking team proved their worth when they won the championship of the week-long Southern Africa Inter-Municipal Sports Association (SAIMSA) tournament that took place in Manzini, Swaziland, last week.

Collen Netshivhulana, who captains the Musina team, said they were happy with their performance after bringing gold medals and a special trophy home. “We were competing among the best in Africa and are excited that we have shown them that there is potential in Musina. We will definitely work very hard to defend this title in the following editions of the tournament.”

Netshivhulana said the team was overwhelmed by the support from the municipal management and political leadership. Cllr Siyaphi Shirilele, who accompanied the team to the stage to collect their medals and trophy during the prize-giving ceremony, said the municipality was very proud of the tennis team. “I witnessed them while they were playing, and everyone was impressed with their outstanding performance. The competition was tough, but it was easy for them because they were well prepared. We are very proud of them because they have put us on the African map.”