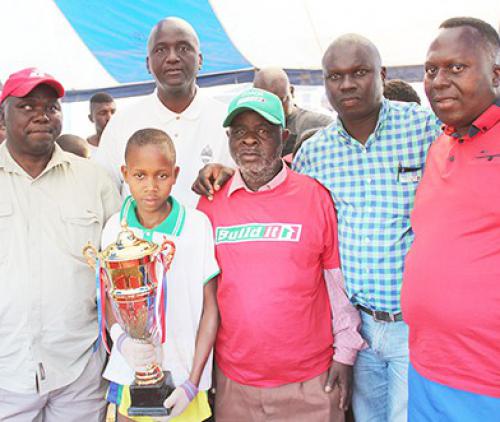 Photographed during the handing over of the trophy to the winning team are, from left to right, Mr Mboneni Phungo (sponsor), Aluwani Makamu, Abednigo Thangoana, Luma Makhesa, Justice Maluleke and Moses Nwandule.

Mudikhomu Primary School were crowned as the champions of the Build-It U/13 soccer tournament when they beat Djunani Primary school 5-4 at Elim on Saturday.

The winner was determined by through a penalty shoot-out, as the score was 0-0 after regulation time.

The manager of Build-It Elim, Mr Mboneni Phungo, said the objective of the programme was to instil important values at schools through participation in sports. It will also increase the physical, emotional and intellectual potential of the scholars and promote better health and an active lifestyle.

He added that it was sad that most rural children did not have entertainment activities after school. He stated that his company would continue to sponsor the circuit in the coming years.

Mr Moses Nwadule of Hlanganani Schools Sport appealed to businesspeople to get involved in promoting local activities. He added that his league had been operating many years without a sponsorship.