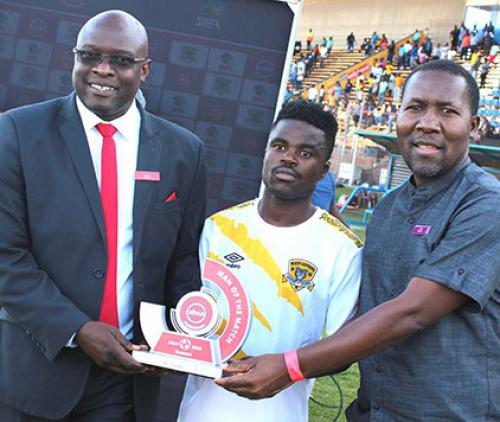 The Man of the Match, Lesedi Kapinga, receives his trophy from Mr Daniel Khethani (left) from Absa Bank, while Mr Stoffel Mabange (right, also from Absa) looks on.

One point for Lidoda Duvha

Da Gama said that he did not understand why Black Leopards were in the second-last position on the log, considering the kind of football they played.

He stressed the fact that they were lucky to go back home with a point in hand, saying Lidoda Duvha were all over them, especially in the last half. Asked about his team’s poor performance in the first two league matches, Da Gama immediately changed the subject and started attacking journalists for their so -called “negative reporting” about his team.

He said his team finished in the top-8 bracket last season, which was their debut season in the Premiership Division, but the radios and newspapers continued to carry adverse stories about them despite that achievement. He severely criticized the fans of Black Leopards for booing at their team’s former right back, Marks Munyai, each time he was in possession.

Munyai played for Lidoda Duvha for seven years until his contract with the club expired at the end of last season.

Black Leopards’ coach, Mr Lionel Soccoia, said his boys had done everything right, but they were not lucky enough on the day.

Highlands Park were the first to score. They took the lead five minutes before the end of the first half. Sphiwe Mahlangu headed home, following a mix-up in the box.

The home side fought back through Lesedi Kapinga in the 65th minute. He beat Park’s keeper, Thela Ngobeni, with a long-range half volley. Leopards lost Lifa Hlongwane through a knee injury a few minutes later. He was replaced with Tswarelo Bereng.

Marks Munyai of Park was the only player who was booked. He kicked the ball away long after the Cape Town-based referee, Mr Abongile Tom, had blown the whistle for an offside.  Lesedi Kapinga of Black Leopards was nominated Man of the Match and received a trophy after the game.

Thuso Phala of Leopards hooks the ball while Marks Munyai of Highlands Park is focused on the ball.