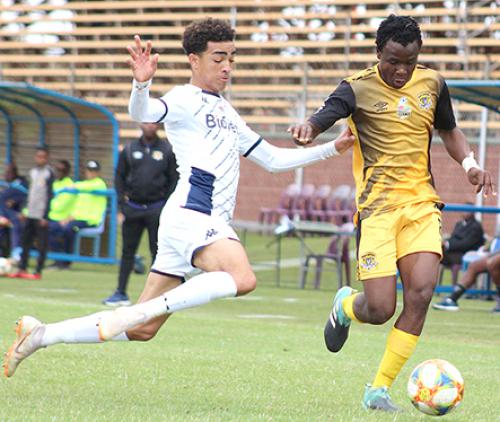 Amukelani Chauke of Leopards (right) controls the ball, while Keenan Philips of Wits intercepts from behind.

In their Multichoice Diski Challenge match at the Thohoyandou Stadium on Sunday, Bidvest Wits brutally walloped Black Leopards 4-1 and moved to the top of the log.

Wits made their intentions clear from the onset. They used their height advantage well and played aerial balls from behind. They squandered two clear scoring opportunities within the first ten minutes of the game, however.

The visitors from Johannesburg rectified their mistakes and took the lead in the 14th minute. Sinenjongo Mkiva beat the offside trap and faced the Leopards’ keeper, Matome Rakau, in a one-on-one situation before unleashing a powerful shot, which was too hot for Rakau to handle. They increased the lead in the 29th minute when Kabelo Makola sent the keeper the wrong way with a half volley.

They scored the third when Makola completed his brace in the 60th minute. Makola was reprimanded with a card for protesting the referee’s decision soon afterwards. Rowan Human scored the fourth in the 69th minute. He finished off a rebound after Mpho Mathebula’s close-range attempt.

The home side had to wait until Wits were reduced to 10 men before they could score their solitary goal. Kabelo Makola of Wits was given his marching orders for ignoring the referee’s whistle. He kicked the ball away long after the referee, Mr Jelly Chabani, had blown the whistle for an offside. The Leopards’ only goal came in the 78th minute via Maanda Makhado.