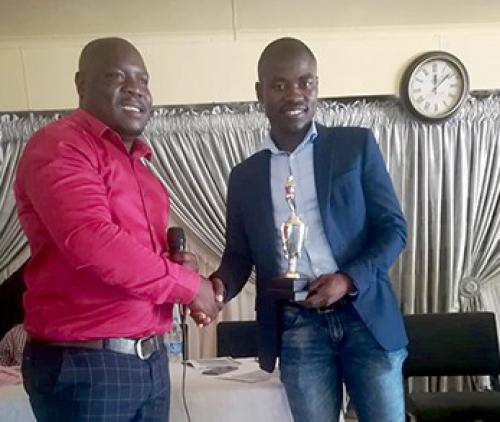 Referee gets recognition from local community

The management at the school had recognised him for, among others, the sporting activities that he had initiated at the school through the years. He had coached and developed youths in soccer in the school and is a driving force with the development programmes.

Chavani is currently a referee attached to South Africa's Premier Soccer League (PSL). The past weekend he was officiating in the quarter-final of the Telkom Cup between Kaizer Chief and Orlando Pirates at the Moses Mabhida Stadium. Kaizer Chiefs won after a penalty shoot-out.

“The school has identified a need to honour Mr Jelly Chavani, who symbolises hard work and dedication,” said the school's representative, educator Mr Owen Mukhari. “Most learners will surely identify with Chavani in that he is still a young man whose passion for developing fellow youths keeps him busy.”

According to Mukhari, Chavani had inspired a lot of children within the community and the surrounding villages. His dream is to empower more young children by developing them within a variety of sporting codes.

In response, Chavani said that he had not expected to be honoured and added that the honour served as a motivation. “I am committed to helping and inspiring young people to become excellent sportsmen and sportswomen,” he said. “I always urge youths to put more effort into what they do – be it academic work or sport.”

Chavani’s career as a referee started when he was only 15 years old. “This was a period of turmoil when referees were assaulted by players and fans on a regular basis,” he said. Chabani paid tribute to his mentors, such as the well-known former referee, Mr Gidion Chamango, who taught him different skills in life. He said that Chamango had encouraged him to stay focussed when officiating matches and to have a match plan ready all the time.

During his career he had the privilege of officiating in matches along with people such as Olani Kwinda, Philip Tinyani, Cedrick Muvhali, Victor Hlungwane and Khamusi Razwimisa. His career as referee took him to countries such as Egypt and Botswana where he had to take up the whistle.

When asked which game had been the most difficult one in his refereeing career, Chabani smiled before saying that no game had been too difficult for him to handle. He singled out the recent match between the Soweto giants, Kaizer Chiefs and Orlando Pirates, last Saturday, saying that this was one that he had enjoyed officiating the most.

“It was an honour for me as it came unexpectedly,” he said. He indicated that his aim was to see himself officiating during international matches in three years’ time.

He encouraged the youth to take education seriously, so that they can face the challenges of the future with ease. He said it was important to set up realistic goals that could be achieved within a given period.