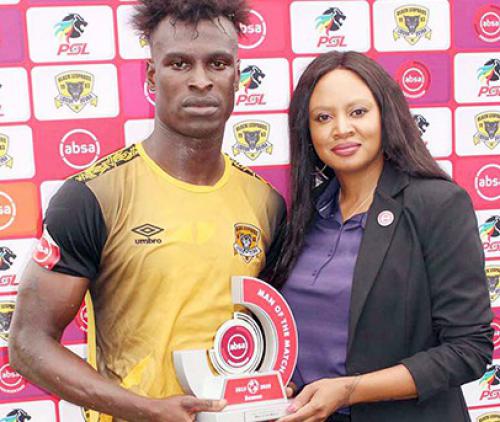 The Man of the Match, Edwin Gyimah of Black Leopards, receives his award from Ms Mampumelelo Sibanyoni from Absa Bank.

Black Leopards rise to the occasion

After losing three matches in a row, Black Leopards rose to the occasion and collected their first league point under the guidance of the team’s new head coach, Mr Kevin Johnson, when they played to a 1-1 draw with Kaizer Chiefs at a packed Thohoyandou Stadium on Saturday.

While Johnson sounded satisfied with the result of the game, he had the feeling that the local lads could have done better.

Responding to questions from a contingent of journalists after the game, he stated that they could have scored at least three goals, had they converted the scoring chances they had created in the last 20 minutes of the game. Asked why he had not included the team’s dribbling wizard, Lesedi Kapinga, in the starting line-up, Mr Johnson justified his decision by saying he applied a “horses for courses” approach.

He said that Chiefs played a physical game and that Kapinga was a diminutive player who would not match the Chiefs players physically. He further indicated that he decided to introduce Kapinga later in the game after realizing that the Chiefs’ defenders were tired at that time. Asked about the team’s Ghanaian defender, Edwin Gyimah, who had played the last 15 minutes of the game with an injury, Johnson stated that the player had demonstrated his unwavering love for the team.

Gyimah sustained a knee injury towards the end of the game, but he soldiered on until the referee blew the final whistle. Gyimah was nominated the Man of the Match.

Johnson’s counterpart in the Chiefs’ camp, Mr Ernst Middendorp, said the game had been the most difficult one for Chiefs this season. He reiterated the fact that he was happy to go back with a draw, saying the Leopards’ coach, Mr Kevin Johnson, had had a good game plan. Lidoda Duvha moved a step up on the log standings, following the draw. They are now in the 14th position on the log with 17 points accumulated from 18 matches.

The Amakhosi were the first to blow the trumpet. Samir Nurkovic headed home, following a corner kick 11 minutes into the game. The goal seemed to be an insult to the Leopards’ players. The local lads were awarded a free kick in the 25-meter area 32 minutes into the game. Mogakolodi Ngele beat the keeper with a half volley from the free kick.

Ngele sustained a knee injury moments later. He was replaced with Joseph Mhlongo.

Leopards will fly to Cape Town for their league match against Cape Town City this weekend. See match preview story elsewhere in the paper.