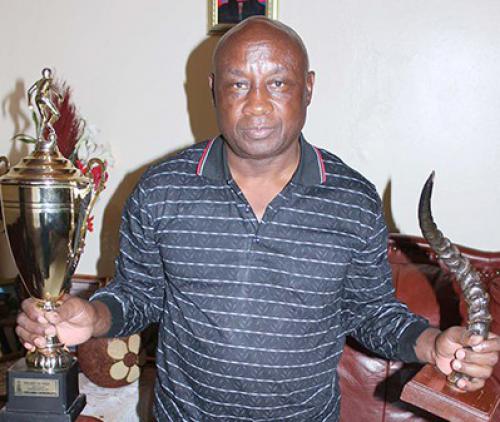 Mr Thivhonali Khorommbi Nemavhola displays some of the awards he received during his heydays.

Mr Thivhonali Khorommbi Nemavhola is a local football legend who has a rich history. He started playing soccer at a tender age and was the first goalkeeper for Makwarela Primary School in the mid-sixties.

His road to fame started way back in 1974, when he became the number one goalkeeper for Mphaphuli High School. While at the school, Nemavhola joined one of the affiliates for the Venda First Division, Mahwahsane Happy Fighters or Maxwete as they were widely known. There he played alongside the likes of Reuben Dzivhani, Tshidumbu Lalumbe and the late Paul Netshilindi. He later migrated to Lufule Flying Bombers.

Nemavhola, or Ntike as his fans called him, established his own club, Sibasa Home Defenders FC, thereafter, where he served as a player-coach for several years. Nemavhola was one of the founder members of Thohoyandou Datsun Highlanders FC, a club that produced several soccer stars of the time, including David “Nanana” Masase and Moses “Shoes” Tshilate.

He was appointed the coach for the Venda national soccer team in 1979. He scooped several awards during his time as a player and as a coach.

The 65-year-old legend served in several football structures after hanging up his soccer boots in the early eighties. He was one of the founder members for the Unity Football Association in 1987. He served as the president of the Thohoyandou One District Football Association between 1993 and 2006.

According to him, his memorable time was when he was appointed head of the delegation for Black Leopards in the Orange/CAF Inter Club Championships way back in 2011. Nemavhola vanished from football circles a year later.

After retiring from the Department of Home Affairs, where he worked for more than 40 years, Nemavhola revealed that he now spends much of his time running his businesses, apart from his active involvement in political activities. He is the deputy chairperson of the Thohoyandou branch of the African National Congress and the chairperson of the Thohoyandou Golgotha Civic Association.