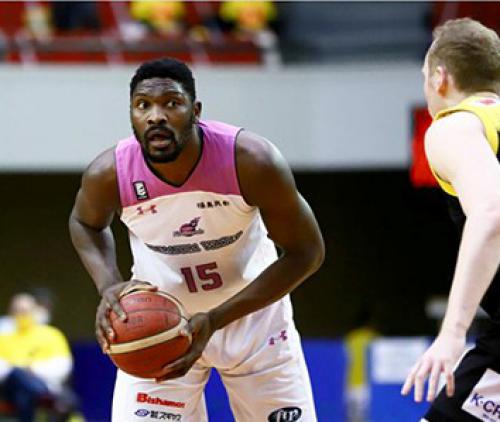 Tshilidzi Nephawe in action during a basketball match where he plays for Hiroshima Dragonflies in Japan. Picture supplied.

Tshilidzi Nephawe, who was born in Ngwenani ya ha Themeli village in the Vhembe District, is making headlines in Japan. This comes after he joined the Japanese B-League basketball side, Hiroshima Dragonflies, ahead of the new season.

Tshilidzi, who is currently living in Hiroshima in Japan, had his first professional basketball match in Osaka city, Japan, where his team, Kumamoto Volters, was playing against Osaka Eversa in 2015.

For Tshilidzi, basketball is not a pastime in Japan but a full-time career. “If you are from South Africa, you’ll know that the (basketball) league is not big over there, so you have to work extra hard to be able to play overseas.”

He left South Africa in 2008 and headed straight to California, USA, to enrol at a National Basketball Association (NBA) school. “This was after I was playing for the South African national team where I was part of an NBA camp in Johannesburg, called Basketball Without Borders,” he said. “That was where I got connected to a high school in the US that offered me a scholarship.”

He was spotted by a scouting team during a provincial basketball tournament in Thohoyandou. At the time he was a pupil at Mphaphuli High School. “Those people from Basketball Limpopo came to my school looking for talent and, when they found me, they were convinced I would make a good basketball player,” he said. “I started playing and, within a short space of time, I was proving to be an excellent player. I loved basketball from the first day.”

Tshilidzi moved from the USA to Japan after receiving an offer from one of the local teams. Upon arrival, he started playing professionally for the Kumamoto Volters. “I couldn’t refuse the offer,” he said. “Professional teams in Japan offered me a spot to come and play here and, above everything else, Japan seemed like a great country to live in, so I decided to take a chance. That was in August 2015.”

Tshilidzi’s highlights include playing in the NCAA Division I Men's Basketball Tournament at least three times in his career. “Playing in this tournament is the highest stage of achievement in basketball for any youth in basketball, and it’s something I always think that was one of the greatest moments of my life,” he said.

He is determined to develop his basketball skills and knowledge, so that he continues to cement his amazing career as an international basketball player. “Well, my goal is to be able to play basketball here in Japan for the rest of my career and be the best player,” he said.

Tshilidzi had also fallen in love with Japanese culture because it resembles Venda culture in many ways. “I love it so much here, and I am finding it very easy to live here, so it feels like home away from home for me,” he said.