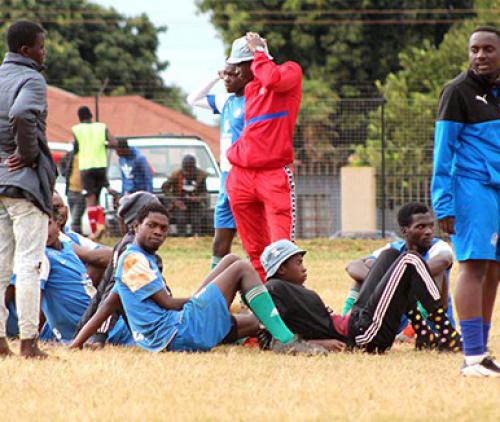 The players and officials of Berea FC relaxing on the pitch after invading it as a way to vent their anger after the match officials had declared their game against Madridtas FC a walkover. Photo: Frank Mavhungu.

Berea FC will not take part in the semi-final stage of the SAFA Vhembe promotional playoffs, but not because they had been booted out of the tournament. The Zwigodini-based side has been dismissed from the tournament for an act of misconduct.

The incident that led to their dismissal occurred at the Tshifulanani Stadium on Sunday. Berea were supposed to have played against Madridtas FC in their first semi-final match, which was scheduled to start at 08:00. According to the available information, Berea arrived at the stadium a few minutes after the scheduled kick-off time. At that stage, the referee had already blown the final whistle and thus declared the game a walkover for Madridtas FC.

The match officials’ decision to declare the game a walkover for Madridtas did not sit well with the players of Berea. They decided to invade the pitch, despite the fact that the team they were supposed to play had already left. Berea’s players and officials remained on the pitch until the teams that were supposed to play in the second semi-final, Vondwe XI Bullets and Madridtas FC, got onto the pitch at 11:30.

Although Berea had joined the convoy to the Tshifudi Stadium, they were denied entry to the stadium by members of the police services who were already waiting at the gate when the bus ferrying the players and officials of Berea arrived.

When asked to comment about the matter, Berea’s team manager, Mr Dakalo Ratshitanga, was quick to mention that the league had long been searching for reasons to expel his team from the annual event. According to him, expelling his team from the playoffs before they could appear before the disciplinary enquiry amounted to imprisonment without trial. “How can they expel us from the tournament before we appear before the disciplinary enquiry?” he asked.