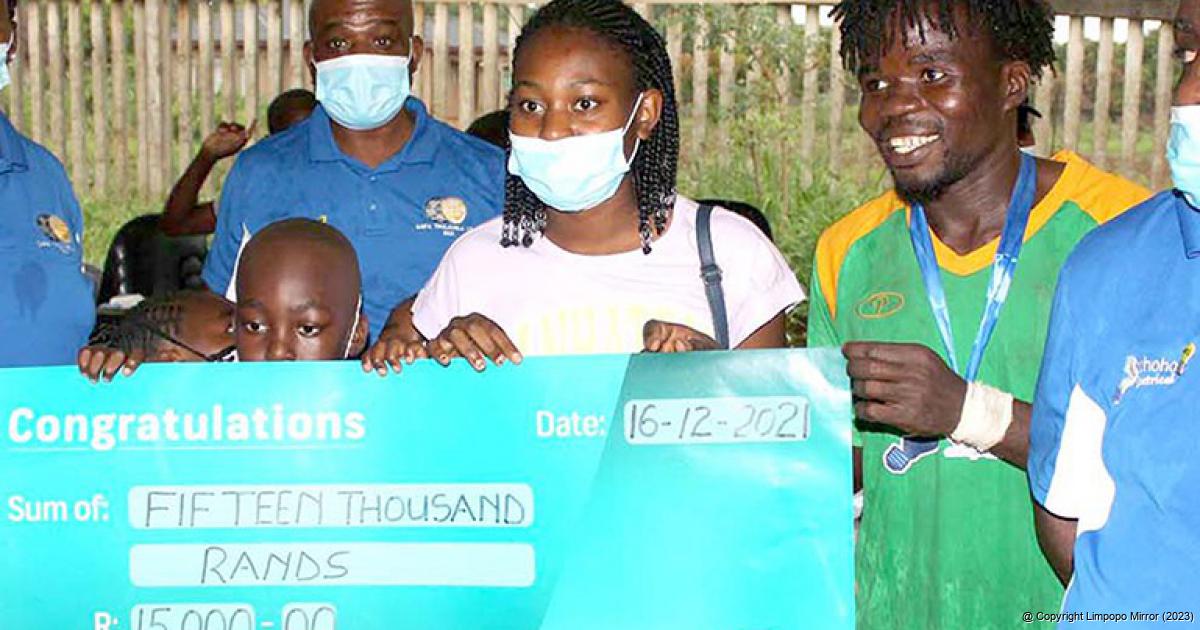 Ms Gladys Mathoho (left) from the sponsors hands over a cheque to the captain of Freedom Rebels, Ndidofelavhone Mphadi (second from right), while Mr Ephraim Singo (right) and the children from the Mathoho family look on.

Mbahe Freedom Rebels are still in celebratory mood. They were crowned the 2021 Mpho Mathoho Electrical KO Competition champions at the Tshifudi Stadium last Thursday. This after they beat Limpopo Silver Stars Soccer Academy 8-7 in the final.

Freedom Rebels were presented with cash prize of R15 000, a floating trophy, gold medals and soccer kit during a ceremony held at the stadium shortly after the final whistle. Freedom Rebels’ way to the final went via Dzwerani United Brothers, whom they beat 2-1 at the same venue two weeks ago.

Teams booted out of the competition in the quarterfinal stage, Bashasha Terror Masters, Bashasha Hungry Lions, Makonde FC and Mutale Vikings, were each presented with a consolation prize of R1 000 and a soccer ball.

During the ceremony, the chairman of the Thulamela Local Football Association (Thulfa), Mr Ephraim Singo, thanked the Mpho Mathoho family for sponsoring the association to the tune of R80 000. He criticised the conduct of one of the teams, Ngovhela Backside FC, who fielded a number of improperly registered players in their quarter-final match against Limpopo Silver Stars Soccer Academy at the Makhuvha Stadium last month. Ngovhela Backside FC were dismissed from the competition as a consequence.