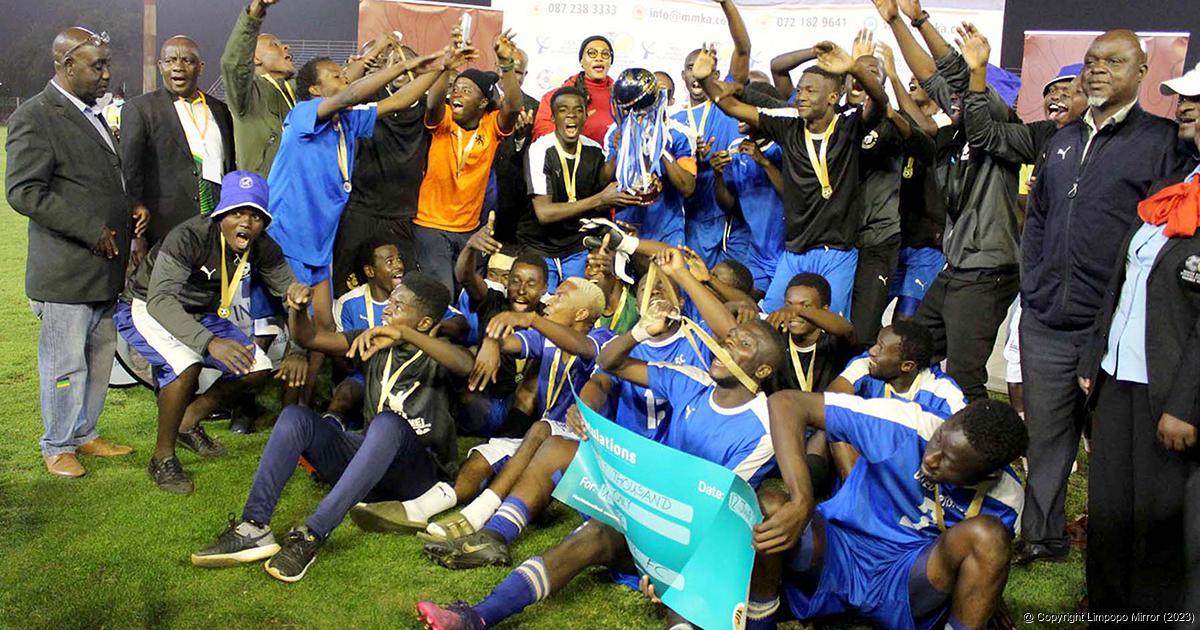 The players and officials of United Artists celebrate with the team’s trophy and cheque during the ceremony. Photo: Frank Mavhungu.

United Artists are gearing up for the provincial promotional playoffs for the SAB League after they were crowned the champions of the Safa Vhembe Regional Association at the Thohoyandou Stadium last Sunday.

United Artists managed to beat Tshivhazwaulu Peace Makers 7-6 in the final to secure a place in the provincial tournament that is expected to be staged at the Seshego Stadium in Polokwane over the weekend of 2 and 3 July.

Artists’ way to the final went via Tshimuthe FC, whom they narrowly beat 1-0 in their semi-final match that was played at the same venue earlier that day.

The Lufule-based side were presented with a cheque to the value of R40 000, gold medals and a floating trophy during a ceremony held at the stadium shortly after the final whistle was blown.

Some of the dignitaries who graced the occasion included the MEC for Sports, Arts and Culture in Limpopo, Mrs Thandi Moraka, and the newly elected provincial secretary of the African National Congress, Vhamusanda Vho-Reuben Madadzhe.

United Artists were the first to find the net in their game against Peace Makers. They took only five minutes to open their account through Ndamulelo Mathoni, who beat the keeper with a long-range ground cutter.

Peace Makers were awarded a free kick in the 24th minute. Langanani Phalanndwa scored from the free kick with a half volley.

United Artists were leading 2-1 when proceedings for the first half came to an end. This followed after Wanga Khorommbi, who came on as a substitute for Gundo Mudau, tried his luck with a half volley from the right corner. The keeper of Peace Makers, Nkhanedzeni Mundalamo, watched helplessly as the ball went beyond his reach.

Peace Makers did not lose hope, although time was fast running out for them. They finally found the equaliser through Mukandangalwo Ramunana, who beat the keeper with a header in the dying minutes of the game.

The winner was determined through penalty shootout as the score was 2-2 at the end of the regulation time. United Artists managed to convert five of their chances, while Peace Makers could score only four times from the white spot.