Life is worth the sacrifice - Mutshegwe

When he started writing at the age of 22, people supported his craft and looked forward to great stories from him. Now Fhatuwani Mutshegwe has officially released his own book, titled I Never Knew Until I Know.

Mutshegwe is from Rabali village in the Nzhelele area and loves reading and writing. He fell in love with reading at a very young age and was inspired by his mother, who always read short stories, dramas and from the Bible. His biggest motivation came after editing a script that was later turned into a movie.

“I don't think I’ll ever leave writing for anything, even if it had a great monetary value,” he said. “I love spending most of my time with different people, having certain debates and exchanging information, because that's where I get my stories.”

However, although he found the endeavour worthwhile, writing about the struggles he had gone through was not easy.  “I was always curious about everything that happened in the family as the eldest son, and that gave me a lot of experience about the dynamics of life, which are the roots of my book,” he said.

Mutshegwe believes that knowing everything in this world is not possible, but by paying close attention, one can stand a chance to learn at least a great deal. “We learn from our mistakes. Some things are learned the hard way, whereas others come more easily. Had I known, I wouldn't have wasted my time on certain things, but I still remain grateful that it was never really a loss. They were lessons never to be forgotten,” he said.

I Never Knew Until I Know is a motivational book with lessons for young and old. When asked why he had written this book, Mutshegwe said that, as a young man, he found it hard to come to terms with reality. While growing up, he never had the advantage to choose what he wanted to satisfy his needs. “It was always about going with what was available,” he said. “When it was time to face reality, I learned the hard way and in an unforgettable manner. I had to undergo betrayal, a heartbreak, missing opportunities and losing the people I most cared about. At the end of the day, I knew life was worth the sacrifice.”

Those who are interested in ordering Mutshegwe's book can call or WhatsApp him on Tel 071 431 8438. 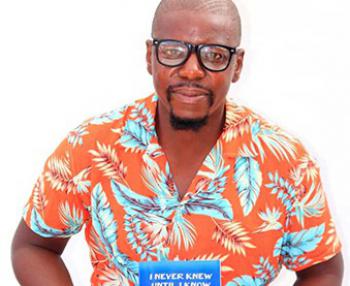 Fhatuwani Mutshegwe has released his own book, titled I Never Knew Until I Know. Picture supplied.