Although this is not a common sight, Hulisani Mbedzi is a regular face at gatherings for Rastas and at reggae music festivals around Limpopo. This lady is busting the stereotype that men are generally the ones who take lead in Rasta activities.

Mbedzi, of Tshakhuma Mutsindoni village, says she feels proud to break the gender barrier to represent women in the local Rastafarianism culture and practices.

Better known as Impress Hulie in the local Rastafarianism fraternity, Mbedzi says she fell in love with the Rasta life and reggae music after meeting her partner and reggae music artist Lutendo CJ Munyai 10 years ago. “He introduced me to reggae music, and thereafter I fell in love with the practices of Rastafarianism. He used to play his guitar in my presence, and I felt that I was really spiritually connected to this type of music. We would go together when he had some gigs and that was where I got used to other Rastas. I then realized that I had many things in common with them, and I slowly converted to their practices. Since then, I have never looked back.”

Mbedzi is also an active member of the Department of Peace, an organized group of Rastas whose aim is to promote Rastafarianism across the Limpopo Province. The group also organises reggae music festivals and gatherings for Rastas to share knowledge on their beliefs and practices. “Since joining the Department of Peace five years ago, I have grown spiritually, and I now know what a true Rasta stand for. South Africa is now a democratic country which gives us equal rights with men, and it is important for us as women to stand up and defend those rights. If we don’t stand up as women, no one will fight for our recognition in this male-dominated country. My wish is to recruit more women in this movement, so that we could also be well represented.”

Although she dreams of releasing a reggae album one day, Mbedzi has now ventured into the reggae music industry by becoming the manager of fellow female reggae artist and colleague Asa Manngo. “Asa is doing very well on the local reggae music scene, which is dominated by males. I now manage her music career to make sure that she operates professionally. My main task is to build her brand, organise gigs for her and to make sure that her music gets airplay at various radio stations.” 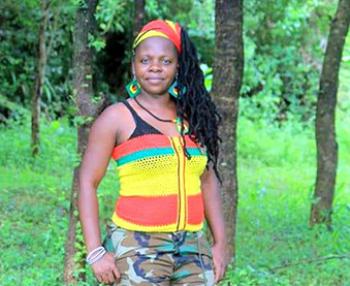 Hulisani Mbedzi, better known as Impress Hulie, is one of the few active and visible female Rastafarians locally. Photo supplied.