A woman of many hats

Carrie Mudau (23) is a woman of many trades. Not only is she a popular radio presenter at Choice FM, she is also an actress, voice artist, content creator, creative director, master of ceremonies (MC), and the founder and host of the Conversations podcast, which focusses on music and life issues in general.

Born and raised in Sibasa, Carrie fell in love with entertainment at a young age. “It all started with my ability to catch new songs fast, and entertaining guests by mimicking dramatic scenes from television shows or dance moves I had seen,” she said.

This is really not surprising for a young girl who attended the Little Flower, an esteemed pre-school that went to great lengths to provide children with a good head start in life. She then proceeded to Makwarela Primary School and later matriculated at Thohoyandou Technical High School.

After school, she followed her arts-and-entertainment dream by registering for a course at AFDA University in Johannesburg. She majored in sound and editing because she has always been intrigued by the making of films and the different ways of storytelling. “It was unfortunate for me that I couldn’t finish my course due to a lack of funds for school fees. So, I decided to come back home and see what I might do in the meantime,” she said.

Carrie met local entertainer and successful master of ceremonies Mbalavhali “Mr MC” Divhambele, who quickly recognised her talents and skills. He encouraged her to start recording radio demos and send them in to some of the local community radio stations. “Mbalavhali believed so much in me,” she said. “He saw a radio presenter in me, something that I didn’t realise at first.”

Soon, one of her demos reached Nzhelele FM, and they gave her a job as presenter for The Prime-Time Slot show, which aired between September and December of 2020. “While I worked at Nzhelele FM, I realised that radio presenting was something that I enjoyed doing and wanted to do every day,” she said. “However, after a few months I left Nzhelele FM and joined Choice FM. That was another milestone in my radio career, as Choice FM is a commercial radio station.”

At Choice FM she was mentored by the great radio guru, Shonisani “Ashifashabba” Muleya. She currently hosts The Insomniac show every Monday to Friday from 03:00 to 06:00, as well as the Morning Rush show on Saturdays from 06:00 to 10:00.

As someone who has loved art from a young age, her interests involve music, painting, drawing, sculpting, storytelling, and writing poems and stories. She also does work for Genesis TV at Genesis Events, where she creates the content, puts everything that needs to be done prior to shooting together and directs the production. “I am a woman of many hats!” she laughs.

Carrie recently came up with a concept called Venda Life, which is about having backyard music sessions with artists from Limpopo. “These sessions will be recorded and posted on the Venda Life YouTube page,” she said. “The aim is to give artists a platform to do what they love and get the exposure they need so much in these trying times of the Covid-19 pandemic.”

She recently got cast as a featured extra on a locally produced film, The Bad Bishop, and she is very excited about venturing into the acting field as well. 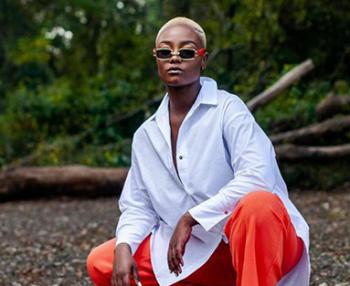 Carrie Mudau is a woman of many hats. Picture supplied.