Ntsako Nombelani, a resident at Jimmy Jones village in Malamulele, believes that his creative writing ability will address socio-economic challenges, corruption and various other aspects of life.

The 38-year-old Nombelani is a political activist who spent his schooling days fighting for access to education through student organisations. His passion for writing took root when educator and multi-award winner Enock Shishenge of Tembisa requested him to contribute to a book, titled Hi landza Nhlalala, which means “We are following the honeybird”, in 2020.

“I started writing after Mr Shishenge asked me to contribute to Hi landza Nhlalala, which was a tribute to our late brother and friend, Mosese Mtileni,” he said.

His books aim to bring awareness about the different challenges facing the young generation. “The books focus on various aspects of life, such as the conditions of the people in Alexandra, socio-economic issues, African politics, governance, education and curricula.”

It also pinpoints corruption and greed, love, transformation, and neo-liberal policies by the government. “The corruption which led to the collapse of VBS, imperialism, and the role of technology (4IR) in our lives, be it at work, home or schools,” he said.

“My aim is to publish the remaining three this year. My first book (Alexandra) has been approved by the Gauteng Department of Education for Gauteng schools and libraries,” he said.

He wrote his books in the Xitsonga language, as he believes it to be one of the most underrated languages in our country. “I aim to contribute towards its (the language’s) growth and ensure that we pride ourselves on using our African languages to express ourselves.”

On the challenges that local writers face, he said, “Selling books is not easy. People would rather buy alcohol instead of investing in reading material. The Xitsonga reading audience is not big, which is one of the challenges that I came across,” he said. 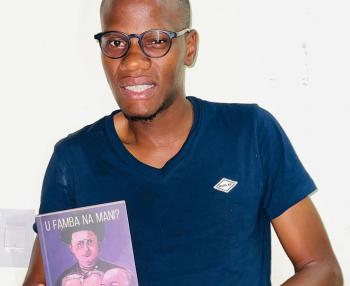