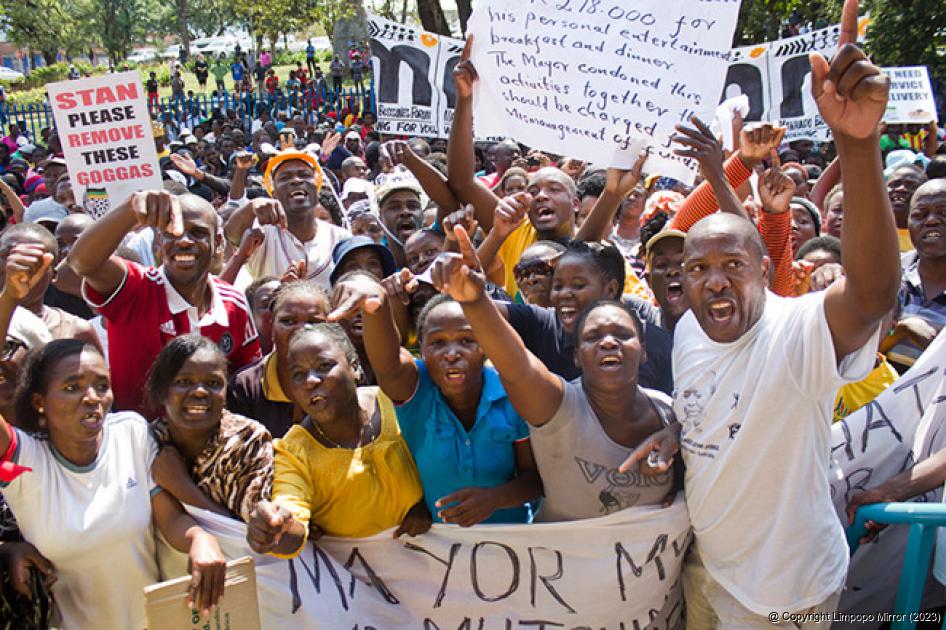 Fear and dread were in the air after news of a march spread through Louis Trichardt last Friday. At around 08:00, nearly all businesses along Songozwi and Krogh Street had closed their doors and they remained closed until around 13:00.

Whoever started spreading the false rumour about the demonstrators' anger and possible hostility towards local businesses had misled the people as this malicious rumour was proved wrong.

The Waterval residents, supported by more Sanco members and businesses in the Makhado area, peacefully marched from the Makhado Information Centre to the Makhado Municipality to hand over a memorandum of demands on service delivery.

Residents, even the elderly, arrived at the municipality and sung expletives to the mayor, Cllr David Mutavhatsindi. A memorandum of concerns and demands was handed to him. People's anger about lack of services was obvious. One placard read: Mutavhatsindi is like an old car. He keeps promising but not performing. Away with Mutavhatsindi!

Sanco Waterval's secretary, Andy Munyai, indicated that the local government is the sphere of government designed to address the concerns of local communities. “Service delivery remains the core business of local government, coupled with addressing concerns of community members in order to avoid protest marches like this,” he said, and people responded with a roar.

He explained that the community had decided to embark on a protest march after realising that the challenges they faced were not being addressed by the municipality. “False promises were made to us, without implementation [of the promised projects or services],” he said.

Munyai said that, because the municipality had failed to deliver services such water, collection of refuse and road maintainance, the municipality was to scrap all service debts, so that there would be no community member who paid for unrendered services. “Everybody is aware of the fact that our communities have not had a constant supply of water, for far too long,” he said. “We demand that all empty and unoccupied sites be sold to our people and not be put on auction in order to accommodate the rich from other areas.”

He explained that crime was also rife in the night as a result of the lack of floodlights. “We demand that high musk lights be erected around our ward in order to reduce crime,” he said. "We also demand that Sanco structures be afforded recognition and respect by this municipality. Tenders must also be awarded in a transparent manner, preferably to our local entrepreneurs in order to empower our people.”

Munyai then read out: “We demand the immediate resignation of the mayor, municipal manager and the Speaker, in favour of service delivery.” He pointed out that the municipality belonged to the people at grassroots level. “We are not going to fold our arms while things are not moving. You are given 21 working days to respond to this memorandum.”

Mutavhatsindi signed the memorandum and promised to tackle it within the set time. "Phanda na Sanco ya Waterval! (Foward with Waterval Sanco!)," shouted Mutavhatsindi. “We thank the leadership of Waterval Sanco, who organised this peaceful march for service delivery demands. I promise you that we will sit down and tackle your memorandum. You will get a response within 21 days on how we are going to handle your issues.”

* "Selfish individuals must stop using the community for their own objectives," said the chairperson of the Songwozi branch of the ANCYL, Mr John Masebe.

He responded to the march by the community of Waterval to the Makhado Municipality last Friday and said his branch supported the people in their plight.

In a statement, Masebe said the community raised tangible and genuine issues and expressed the hope that the leadership of the ANC would "attend to this issues before our people die of thirst." However, he slammed people he described as the "minority with minor minds" to stop using the community for their own purposes, referring to xenophobic attacks that are taking place elsewhere in the country.