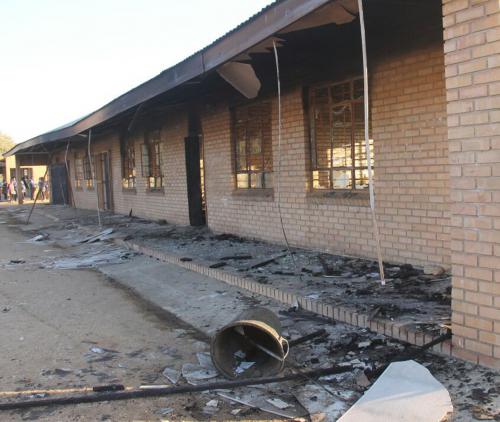 Some of the damage at Mugoidwa Secondary School at Tshivhulana.

Pupils in the embattled Vuwani area, an area that has been marred by violent protests that brought life to a complete halt for about five months, have vowed to return to classes, no matter the odds.

This was decided at Mugoidwa Secondary School at Tshivhulana in Vuwani, where a block was burnt down on Tuesday evening, a few hours before the pupils were to resume their schooling. The pupils have already lost half of their academic year as a result of the violent protests in the area that left about 30 schools totally or partly destroyed by fire.

Residents in the area are protesting their incorporation in a new municipality that will include the area of Malamulele in Vhembe. Since the start of a total shut-down, everything, including schools, came to a complete standstill. More than 50 000 learners in the area were affected.

More than 2 000 Grade 12s, who missed their half-year examinations, received a reprieve when the Department of Education, in conjunction with concerned stakeholders in Vhembe, organised study camps. They spent a month at three different camps in Limpopo, where they were able to write their mid-year examinations and catch up on the time lost.

It was expected that the schools would open on 4 August, just after the local government elections, but that had to be postponed to Wednesday this week because of some challenges at the affected schools. At the weekend, and even on Tuesday, communities spent time trying to clean up the mess at schools, preparing for the big day when these schools would reopen.

On the eve of the much-awaited reopening, yet another school was torched in the Vuwani area. A whole block housing Grades 9 and 10 was totally destroyed when unknown arsonists targeted the school.

School-governing-body chairperson at Mugoidwa Mr Robert Tshivhenga said he received news of the burning at around 19:00 while attending a funeral prayer service at the nearby village of Manavhela. “I had to abandon the prayer session and rush back to the village. We are very sad as we have prepared hard and were looking forward to the day when our children would go back to classes after missing their most valuable academic time for a long time.”

He added that they were lucky that only four classes had been affected “and we are looking at ways to accommodate the affected pupils. Looking at things, there is no going back. Pupils are very eager to catch up on the lost time, and this is the reason why they decided to come even after hearing that their school was burnt.”

Tshivhenga added that they were not in favour of another postponement of the education of their children and the pupils were highly motivated, despite the odds. Nineteen-year-old Grade 12 pupil Uhone Siaga said that, with or without classrooms, they were ready to start with their studies. “We have lost plenty of schooling time, and after undergoing the camps, we felt motivated and encouraged that we would finish the year on a high note.”

Chief Ntsieni Netshimbupfe, who visited the school, said he was encouraged by the spirit shown by the pupils who, despite the setback, went back to classes and attended as if nothing had happened. “We have been trying to chart the way forward to the reopening of schools in the area. We had meetings and we were counting ourselves lucky that no school was burnt in the Tshimbupfe area, but all of a sudden this happens. We are still going to ask for assistance for the pupils to get extra classes during weekends for them to catch up on the work that they have lost,” he said.

Education spokesperson Elijah Mhlanga condemned the act, saying pupils had prepared themselves to go back to school. “It is extremely disappointing, but we hope it will not deter the pupils from going back to school. We are going to work with the communities to make sure that the instigators and perpetrators are isolated from the community,” he said.

Elsewhere in the area, classes resumed as anticipated, with pupils coming to school in numbers. Even the town of Vuwani has come back to life as the razor wire erected by the police has been removed. A visit to the town showed people going about their daily lives as if nothing had happened. Taxis are moving around the area.

Police inspect the damage caused by the fire at the school.

Pupils at the back of the burnt-out block.