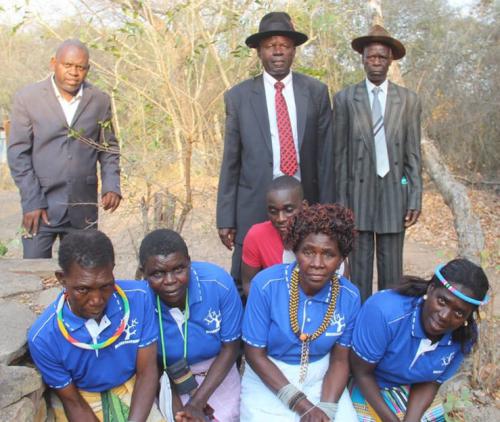 During the celebration, standing next to the Mutavhatsindi tree, are from left to right businessman Mr Colbert Ragimana, Chief Nthuseni Nemafukane, and Mr Madambi Tshilangano. With them are local traditional dancers.

The community of Mafukane outside Tshilamba, under the Thengwe traditional authority in the Thulamela area, was in a joyous mood at the weekend.

The rural community might not have all the glitter of the urban areas, but they are blessed to have a mystic tree that is only found in their area.

Many theories surround the Mutavhatsindi tree (Breckenridge). History has it that in 1620, a leader of the Vhatavhatsindi who had migrated from Central Africa settled in the area where the tree grows. He is believed to have used a mystic whistle made from the wood of this tree to ward off enemies.

The tree has become part of their heritage and is regarded as the pride of the community. To safeguard it, the community has secured the whole area where it is found, and the area is restricted. It has also become a tourist attraction and people from far and wide come to see the mystic tree.

A local businessman, Mr Colbert Ragimana, has also named his lodge after this well-known tree. He sponsored the weekend event, where the community spent the day at the site celebrating through song and dance.

The event, held at the Mutavhatsindi Nature Reserve, was attended by officials from government, local councillors, community structures, the local traditional leadership and many community members. After the formal programme, guests were treated to meat from a cow donated by Ragimana.

Speaking during the event, Chief Nthuseni Nemafukane urged his subjects to protect their God-given treasure that is only found in their area. “This is your heritage and I urge you all to guard possessively against all intrusions here. We have big plans about this place. As the leadership, we have a vision that this place benefits all of us. There is a lot of unemployment and poverty here, and if the government could lend us a helping hand, this place could become economically viable and we make a better life for all," he said.

Nemafukane further indicated that the day would be celebrated annually as part of their heritage celebrations.

Businessman Mr Colbert Ragimana, who sponsored the event, said he would continue supporting the local community as a way of ploughing back into the community. “It is our social responsibility as a company to support community initiatives.”