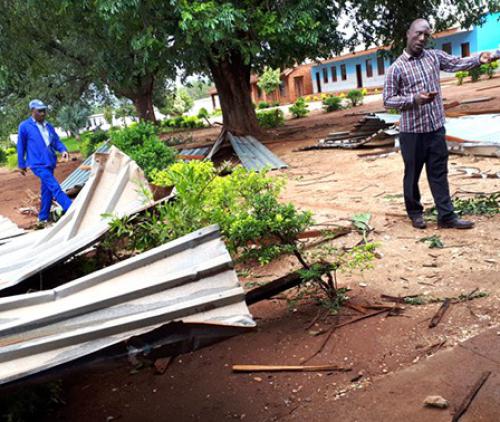 Corrugated iron lies scattered all over the yard at Shikundu Secondary School.

Shikundu Secondary School at Shikundu in the Collins Chabane Municipality was dealt a severe blow when a fierce storm blew the roofs of some classes away, leaving dams of water in the classrooms.

The incident, which is still the talk of the village, happened on Saturday afternoon. This is not the only area that was hard hit by storms as other villages in Vhembe were also affected.

A fortnight ago, more than 1 000 homes were left without roofs in Vhembe. Some villages were left in the dark for days as electricity poles were uprooted by the heavy winds and storms.

About the latest incident at Shikundu Secondary, SGB secretary Ms Tinyiko Grace Baloyi said she was at home when a quick and heavy storm hit the area. "It was around 16:00 and I was at home when I received a call that the roofing of four classrooms had been blown away. I rushed there, only to find corrugated iron scattered all over the school. There was water in the classes and, fortunately enough, our books were spared. We are just happy that it happened during the weekend and that no school children were present,” she said.

She further indicated that electrical cables were left exposed. "This school was built in 1972 by the community, using mud bricks. It is in a dilapidated state and the government renovated it last year, but it seems as if poor workmanship is counting against it," said Baloyi.

Vhembe District Municipality spokesperson Mr Matodzi Ralushai confirmed that many villages were affected by the weekend’s storms. "Our teams are still out assessing the damage. We are doing our part in assisting the affected communities, but some of the work in communities are out of our scope of work," he said.