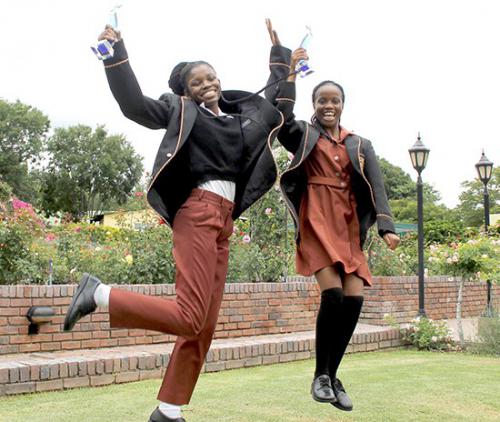 Khuthadzo Mavhina and Mikano Masithi, the two top pupils from Mbilwi High, jumped for joy after the matric results were announced.

Mbilwi Secondary School again made the Vhembe district proud. The school was the best-performing school in Limpopo, based on the matric results for 2018. Two of the school’s learners, Khuthadzo Anthel Mavhina and Mikano Ndodzo Masithi, are the top matric pupils in the province.

During a press conference held at the Ranch Hotel last Friday, the MEC for Education in Limpopo, Mr Ishmael Kgetjepe, announced that the province’s matric pupils had achieved a 69,4% pass rate. This is a slight improvement on the previous year’s results. The Vhembe schools outperformed their counterparts in the other Limpopo districts.

Kgetjepe said that out of 76 730 candidates who had sat for the final exams, 53 254 had passed. He emphasised that all stakeholders should understand the challenges and opportunities, with “a view of being part of (the) solution providers in improving the education situation in the province.” He said that was essential that parents become an integral part of their children’s education.

Kgetjepe expressed gratitude to the parents and guardians who had given their children the necessary support and encouragement during this time. “The importance of the role of parents should never be underestimated, as it is critical in sustaining and bolstering the teaching and learning process. The results achieved by the teachers did not happen by accident or luck. It is a result of hard work and dedication. Teachers in this province committed themselves in ways that should be an example to the rest of their profession and we truly appreciate their selfless contribution,” said the MEC.

Over the past few years, the department has focussed on the extent to which underprivileged schools improved. “The department is aware of the reality that, despite our concerted efforts to redress the inequalities, many of the students continued to learn under extremely difficult conditions.” He said one should never venture into comparing the achievements of Limpopo with the sister provinces that did not share the same realities on the ground.

The premier, Stan Mathabatha, congratulated the matriculants who had done well and wished them success with their tertiary studies. He encouraged those who had not made it to go back and work hard.

Khuthadzo Mavhina, one of the province’s top achievers, advised other pupils to find successful people as role models. “Having role models in life usually helps a person to be able to draw a picture of where he or she wants to be in future,” she added.

Mavhina is going to study actuarial sciences at the University of Cape Town. She said that success only came after hard work. She encouraged other pupils who had not made it the past year, however, to work very hard and not give up. “Your knock-down is not your knock-out,” she added.

Mikano Ndodzo Masithi, another top pupil from Mbilwi High, said that time management, discipline and hard work were the most important things that had made her achieve good results. She said that her success was due to the grace of God. The support she got from both the teachers and her parents was also imperative for her success, she added. Masithi is going to study chemical engineering at the University of Cape Town.

The top pupil in the section for Special Schools in the province is Sipho Chauke of Rivoni School for the Blind.