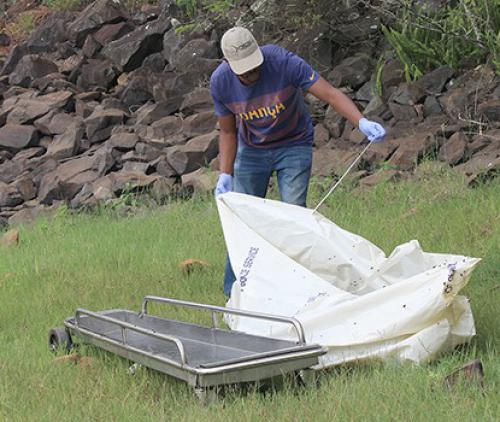 Police remove the body of the unknown man from the dam where it was found.

A young man who allegedly tried to impress his friends by showing off his exceptional swimming skills paid with his life when he drowned in the dam while he was swimming.

The unknown man, believed to be in his thirties, is alleged to have chased away crocodiles with his friends before venturing into the deep waters of Thathe Vondo Dam outside Thohoyandou.

Information by sources who preferred anonymity said the man had taken a dive and swum a distance into the dam and back to the shore. His friends allegedly tried to dissuade him from going back into the water, but be went in anyway.

That was the last they saw of him, and the friends vanished.

The incident happened on New Year’s Day, but the body was only discovered on Monday at about 12:30. This is not the only incident to have happened in Limpopo this week as three more incidents of drowning were reported in different parts of the province.

On Saturday, at around 13:00, 12-year-old Itumeleng Kapa drowned while swimming with his brother and friends at the local river in Mohlabaneng village in Bolobedu.

In another incident, on Sunday, a 14-year-old girl at Ha-Mutsha in the Levubu policing area was found floating in a local river. The girl, Munyadziwa Mulovhedzi, was found by a passer-by. The police are investigating and the circumstances leading her death are still unknown.

Post-mortems are still to be performed to determine the cause of death in all the cases.

With the Thathe Vondo incident, Limpopo police spokesperson Col Moatshe Ngoepe said that, after the police had been notified, they had reacted swiftly and, upon their arrival, they had found the lifeless body of an unknown man.

Meanwhile, the South African Police Service in Limpopo has once again sent a warning to members of the community about the alarming increase of drowning incidents taking place across the province.

"Members of the community, especially parents and guardians, must ensure child safety at all times to prevent this type of incident from occurring. They must constantly talk to their children and make them aware of the possible dangers while around dams and rivers, including swimming without the close supervision of professional divers," Ngoepe said.

The body of the unknown man is being loaded into a government mortuary van after it was found in the Thathe Vondo Dam on Monday.