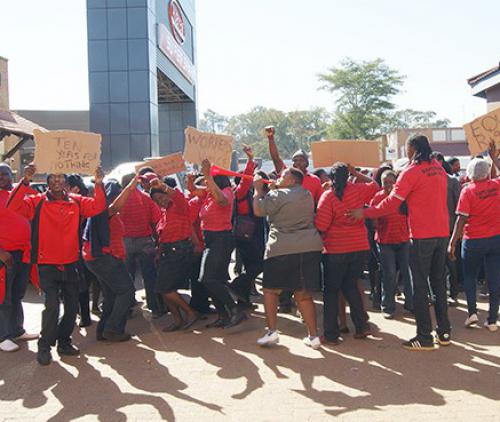 Some of the SAFCRAWU-affiliated Elim SuperSpar workers marched in front the store on Tuesday and Wednesday.

“We are making it loud and clear that the workers will not get back to work until the employers have entered into a salary increment agreement with them. Even tomorrow (Wednesday) workers will meet here in front the Elim SuperSpar and demonstrate peacefully for better work conditions.”

Those were the words of the representative of the South African Catering, Retail and Allied Workers' Union (SAFCRAWU), Mr Nndwamato Sithagu, when he was addressing the Elim SuperSpar's top management in absentia during the strike.

Workers of Elim SuperSpar embarked on a strike on Tuesday morning at about 10:00. SAFCRAWU stated that workers needed an 8% salary increment. The union was further appalled to learn that workers worked within a discriminative environment where top officials still bullied and intimidated them with the threat of dismissal.

“We learned from our members that being insulted, bullied and told how poor they are have been the order of the day at the Elim SuperSpar,” Sithagu said. “We want to meet the employer, so we can air the grievances of our members and also ensure that they get a salary increase of 8%.”

He stated that it was not logical that employees who started working at the chain store some 10 years ago would get paid the very salary as those who had only started working there some three months ago. “There should be salary adjustment or else the workers are being trodden underfoot by a bossy employer who fails to lead.”

A 48-year-old mother of three girls and two boys, who started working at the chain store some 10 years ago, said that the R3 840 salary that she received from the Elim SuperSpar before deductions was not enough to remunerate her dedicated work.

“I work very hard, but then the management is demotivating me,” she said. “I have worked for the company for many years and I feel that I deserve more. I am unable to live by that money. I have children who are at universities and I have got to send them something each month end, and then I am usually left with nothing to go by.”

Sithagu said the Elim SuperSpar's management had since shown that they did not care about the employees. “When we needed to talk with them as workers' representatives, they would tell us that the march is illegal – which is not true because we had applied with relevant authorities to stage this peaceful march,” he said.

Elim SuperSpar's manager, Mr LJ Coetzee, stated that it was not true that workers were being underpaid. He then said that the employer paid workers according to the National Minimum Wage Act and that they fully complied with all labour regulatory requirements.

“The employer complies with the Wholesale and Retail Sectoral Determination whereby the Minister of Labour determines the increases of salaries on an annual basis,” Coetzee said. “All employees [who were] not adjusted by the minimum wage increase stipulated by Labour on 1 February 2019 have also been adjusted accordingly.”

He denied the allegations that top officials at the store bullied workers and added that each worker knew the right channels of submitting complaints and grievances in relation to any incidents that might occur in the workplace.

“The employer has a very strict policy and an Employment Equity Forum,” he said. “Complaints can be submitted within the grievance procedure of the employer. Any complaints or grievances are handled by independent chairpersons if they cannot be resolved internally. The rules of the employer are consistently and without exception applied towards employees and managers.”

In conclusion, Coetzee stated that the worker's union had staged an un-procedural strike and made it clear that the employer was not going to offer any salary increment to employees because the employer had all along complied with the new minimum-wage act.

“The strike may jeopardize the jobs of the employees who are under the leadership of the union,” he said. “The employer approached the Labour Court for protection.”