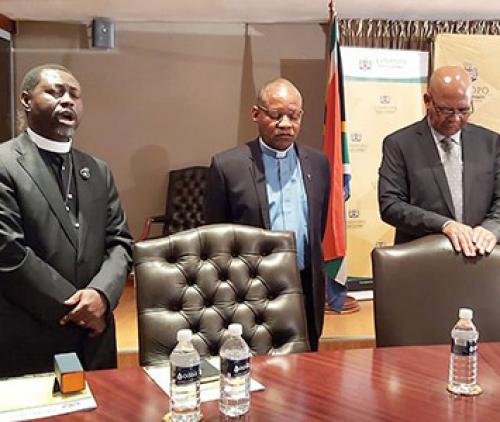 Premier Stanley Mathabatha flanked by SACC members in prayer during the meeting.

The South African Council of Churches (SACC) has pledged its support to the Limpopo government in the fight against political killings in the province.

This was announced by SACC chairperson Rev Awedzani Nemaukhwe during a joint media briefing held at the Premier’s office in Polokwane last Thursday. The meeting was convened in the wake of the killings of government officials and community leaders around the province, including Tubatse, Thulamela and Mogalakwena local municipalities.

“Key among the issues that were discussed in this meeting was the role that could be played under the entire civil society movement to help government, the law-enforcement agencies in particular, to fight and root out these heinous and evil acts that continue to rear their ugly heads in our communities,” said Nemaukhwe.

Premier Stanley Mathabatha said the meeting was unanimous in its condemnation of the senseless, reckless and unacceptable acts that gave an impression that “in our province human life is lately treated with disdain. The meeting was equally concerned that behind these planned killings appear to be faceless forces with no regard for human life, a sacred gift that only God can give”.

He said the meeting also considered it only senseless and barbaric that some people would use violence and murder to settle their differences. He added that Limpopo was, without a doubt, generally a peaceful province. “In this regard, the meeting has therefore declared that those behind these killings are enemies of peace who need to be isolated, brought to book and dealt with in terms of the laws of the country.”

Mathabatha urged the community to “rise up again the peddlers of these callous acts and voice their dissent. Not anywhere in the civilized world could it be allowed that people serving the public get killed in the manner we saw in the cases involving Timson Tshililo, Ronald Mani, Piet Pale, Lleka Lekalakal, Thabang Maupa, Vaaltyn Kekana and Ralph Kansane and yet still remain silent”.

“The meeting has therefore agreed that we need to stage an open conversation on the building space within and amongst the people of Limpopo province. This platform will allow communities to express themselves on this spate of violence attacks with the view to help find a long-lasting solution,” he said.

The Premier said the executive council of Limpopo endorsed the proposal of convening a community-safety dialogue as a matter of urgency.

The MEC for Transport and Community Safety, Dickson Masemola, was directed to convene the justice, crime prevention and security cluster and work together with the SACC, traditional leaders, community policing forums as well as other organs of civil society to prepare for the provincial dialogue.

The meeting also agreed on a need for a constant interaction between the provincial government and organized civil society formations to share and discuss ways and means in terms of which the province could reclaim its glory days of being a peaceful province.

Whistle-blowers were also encouraged to share information with the law-enforcement agencies.