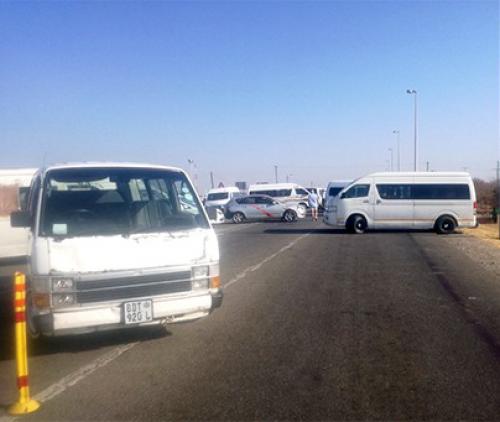 Scenes at the weighbridge on the N1 north at the Beitbridge border post after members of the Musina Meter Taxi Association barricaded the national route earlier today. Photo supplied.

Traffic flow on the N1 north was severely affected earlier today due to road closures by aggrieved taxi operators.

“The intervention by law enforcement and the SAPS has been long overdue. We are tired of minibus taxis and cars operating between the Musina and Beitbridge border without permits,” said Mr Jealous Munyai, a member of Musina Meter Taxi Association (MTA). The MTA closed off the N1 between the weighbridge and Beitbridge out of protest against these “illegal” taxi operators.

“We are tired of this illegal operation. Though they charge the same amount [R10] from Musina to the border they are doing it illegally. We benefit the same, yet we have to pay for a permit to operate in the route legally,” said Munyai.

Munyai, who has been in the taxi industry for seven years, said that these illegal taxi operators give the local taxi industry a bad name. He claimed that some of them even rob unsuspecting travellers on their way to the border. “Today we decided to block the N1 to attract the attention of law enforcement and the SAPS. Yes, they came and addressed us and promised to work around the clock to stop the illegal taxis,” said Munyai.