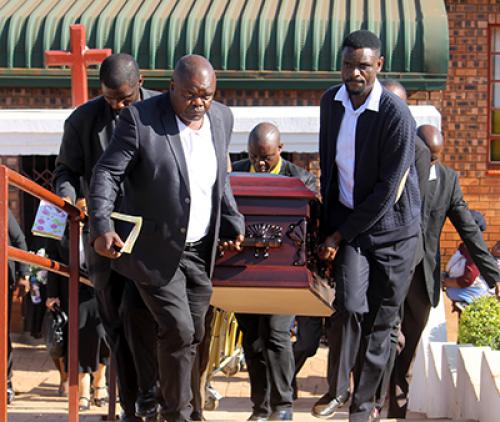 Mr Ben Masala Ramaphosa, the half-brother of president Cyril Ramaphosa, was laid to rest at the Khalavha cemetery the past weekend.

The late Mr Ben Ramaphosa was a former teacher at the Tshifhena Secondary School. He passed away on Monday, 14 October, after a long battle with, among other problems, diabetes.

Among the dignitaries who attend the funeral were President Cyril Ramaphosa, traditional leaders, MECs, local mayors and the ANC leadership in the province.

President Ramaphosa described his late half-brother as a very relaxed person and a family man. “Ben was a family builder. I remember when our fathers passed away and it was left to us to unite and build the family. Ben was the architect of the process,” he said.

President Ramaphosa also shared some of the memories he had of his late half-brother, especially when they were staying at the Mphaphuli High School residence. “When I went to Mphaphuli High in the 70s, Ben was the one who showed me around, because I didn’t know Venda very well as I was from Gauteng. Ben helped me with almost everything, from cooking to carrying the keys of my case. He was like my personal assistant.”

President Ramaphosa said he would like his late half-brother to be remembered as a fighter and someone who was passionate about the future. “In his last days he emphasised the (need for) family unity and the unity of the ANC.”

Ben Masala Ramaphosa was born on 24 June 1953 and he worked as a teacher for various schools, including Mphaphuli High, where he also went to school. He retired from teaching at Tshifhena Secondary School in 2013. He is survived by his half-brother, four children and grandchildren.

President Cyril Ramaphosa shared memories he had of his brother.