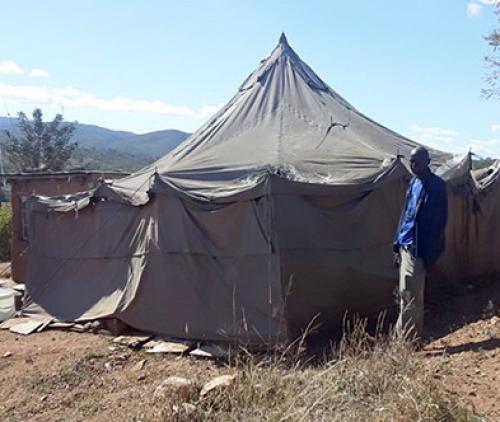 Mr Moses Butana Mnisi of Nthabalala Sedzaufhire is staying in a dilapidated tent with 10 family members.

Family of ten still living in tent after 2010 floods

A distraught Mr Moses Butana Mnisi of Nthabalala Sedzaufhire is staying in a dilapidated tent with 10 other family members.

Since the floods of 2000, he has been waiting for an RDP house that had allegedly been promised to him. Mnisi said that he had applied for the RDP house at the Makhado Municipality in 2001, along with the others floods victims. Not long afterwards, a councillor came to survey his site. He said that a house had been allocated to him and registered in his name.

He said his mud house had collapsed and his furniture had been damaged. He said that the councillor had later visited him and told him to clean his yard where the house could be built. He expressed anger toward the Makhado Municipality, saying that they had promised him an RDP house, but he was still waiting for the house after 19 years.

"I was on the list in 2017 to get a house. I need a house where I can stay with my family,” said a depressed Mnisi. He said he had been shocked and surprised upon hearing that their RDP house had been given to another man in the same village.

“What worries me the most is the fact that our local councillor knows about our situation, but has not done anything about it,” said Mnisi. “The tent is not safe, especially in the rainy season.”

Makhado Mayor Samuel Munyai said he had visited the family two weeks ago after he had been contacted by the ward councillor, Dorah Mukwevho, to assess the situation. He said the government aimed to uplift the community. "We wanted to identify those without proper shelter and who usually do not know where their next plate of food will come from," he said. He also appealed to any donor who can assist people living in poverty and uplift the community.