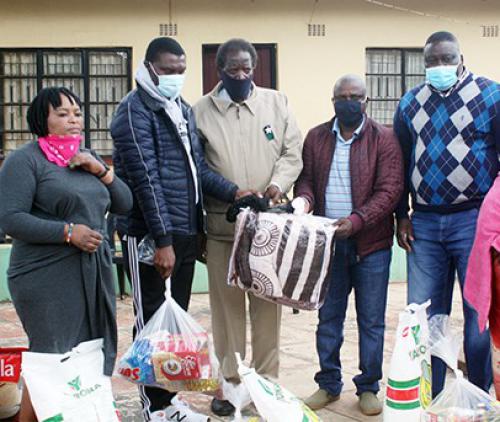 The Depuy Minister in the Office of the President, Ms Thembei Siweya (left), Dr Bejane Chauke and Ndhuna Daniel Nhongani hand over food parcels to  needy community members at Green Farm near Shigalo.

“Report all forms of gender abuse”

The Deputy Minister in the office of the Presidency, Ms Thembi Siweya, called on women to report all forms of woman and child abuse.

“We want to send a message to the young women that they must not be afraid to report all forms of gender-based violence, regardless of whether the perpetrators are breadwinners in the family. We know that many women are afraid that if they expose people who abuse them, they will struggle without food on the table,” said Siweya.

“We appreciate the good heart of the BF Foundation for thinking of helping and giving to needy people, especially during the Covid-19 disaster.”

Chauke said he was born and raised in the deep rural village of Green Farm and used to go to school barefoot. He wants to change for the better the life of poor communities as they did not choose to be in that situation. He said the foundation had already donated food parcels to poor and needy families in his village last December, so that they could enjoy Christmas like other people.

“We also think of donating blankets to the elderly people, because it is freezing winter and without warm blankets, they will suffer a lot. We also paid school fees and tuition fees for poor learners because we are serious about their future,” said Chauke.

The traditional leader of Green Farm village, Ndhuna Daniel Nhongani, was over the moon to learn that the BF Foundation was ready to help the communities. He told the Deputy Minister that his villagers were crying foul because of the bad state of the roads and the lack of clean water.