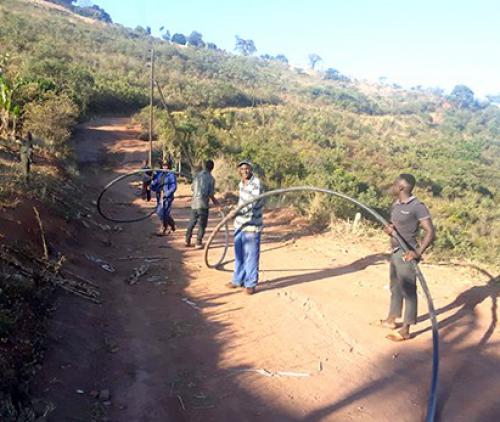 Some of the residents from Lwamondo-Habelemu hold the pipes meant to channel water from the nearby well.

Lwamondo-Habelemu make their plans to get water

After many unsuccessful attempts by the rural communities of Lwamondo-Habelemu outside Thohoyandou to get clean water from the Vhembe District Municipality (VDM), more than 100 households decided to do their own thing and collected funds to be used for purchasing water pipes.

Community leader at Lwamondo-Habelemu Mr Special Netshivhumbe said they had been battling for a long time to get clean water from their taps, but VDM had sent them from pillar to post. They eventually decided to channel water from a nearby well, situated in the mountain.

“We have collected R650 from each household to purchase the pipes that will be installed at the well. We were tired of the broken promises we received from the Vhembe District, and we hope life will now change for the better,” said Netshivhumbe.

According to Netshivhumbe, water is a basic need of every citizen, but, unfortunately, the only way they were going to get water seemed to be by arranging things for themselves. He said many rural communities were without clean, running water. He encouraged them to not wait for the district municipality but to group together and do their own thing.

The spokesperson for the Vhembe District Municipality, Mr Matodzi Ralushai, said they were doing everything they could to get water to the communities. He said that they were worried about all the illegal connections to water sources, which resulted in many people’s suffering.

Ralushai said serious leakages of water occurred at Ngovhela village because of illegal connections, which resulted in the closure of the pipeline. This situation affects areas such as Makwarela, Mbaleni, Hamagidi, and Mbilwi, where residents have been without water for several weeks.

Thulamela municipality’s Ward 17 councillor, Mr Gabriel Malaka, confirmed that most of the areas were without running water because of the illegal connection of waterpipes.