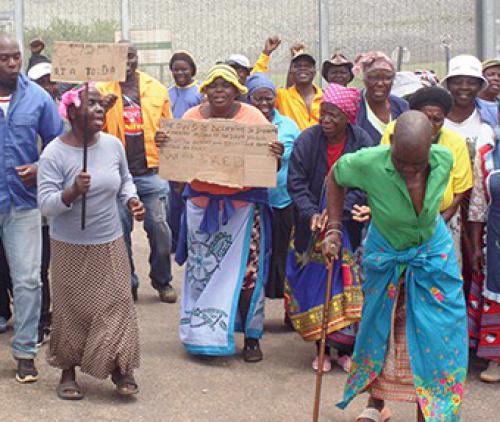 In February this year, angry community members from Ha-Mutoti and Ha-Budeli protested at the entrance to the Nandoni Dam, urging the Department of Water and Sanitation to pay them for their arable land that was destroyed when the Nandoni Dam was built.

The Deputy Minister of Water and Sanitation, David Mohlobo, has stepped in to help resolve the Nandoni Dam dispute and he ordered the departmental officials to fast-track the compensation process.

When the dam was constructed in the early 2000s, some 400 families were directly affected. The inhabitants of Budeli, Mulenzhe, Tshiulungoma, and Dididi had to be relocated to new houses built by the Department of Water Affairs and Forestry. The dam was officially opened in 2005 and the estimated cost of construction was R373,3 million.

From the onset, residents complained, saying that they had either not been compensated or that the compensation had not been fair. The matter was investigated by the former Public Protector (PP), Mr Lawrence Mushwana, and in his report he instructed that remedial action should be taken. This matter has, however, been lingering for years.

Mushwana recommended that the department revisit the amounts payable for compensation and conduct a review of the rate of payment for fruit farmers. Alternatively, separate payments should be made for the loss of land rights, fruit trees, and loss of production, agricultural equipment, and fences.

The report also found that the department did not have a post-resettlement plan to deal with complaints raised by affected communities, who lost their homesteads and agricultural land during relocations.

Deputy Minister Mahlobo convened a meeting last week with officials responsible for the full implementation of the PP’s remedial action to receive a progress report on actions to date. While acknowledging some progress, Mahlobo urged those involved to pick up the pace of the implementation, as “it is unfair to keep affected communities waiting”.

“So far, the department is at 81% in completing the construction of new houses for the families that were moved and has made considerable progress in repairing houses with structural defects.

“The work is expected to be completed by June 2021, after it was initially hindered by the outbreak of the COVID-19 pandemic. This includes 362 houses with structural defects in Budeli, Mulenzhe, Dididi, and Tshilungoma villages,” Mahlobo said.

Earlier this year, the Deputy Minister visited the area and met with representatives of the Nandoni Complaints Resolution Committee (NCRC). His meeting also followed protest action, which included a sit-in at the gate leading to the dam. Mahlobo then promised to set up a help desk, comprising team members from his department, which would be able to visit the affected communities and revise the plan of action to speed up the process. “We don’t want the affected communities to lose their money, and we urge for smooth and good cooperation between our officials and the affected communities,” said Mahlobo during the visit in March.

Ten villages were subsequently assisted, but the process grinded to a halt because of the announcement of the nationwide Covid-19 lockdown. The helpdesks have now been resuscitated and are in full operation.

“The four remaining villages are being assisted with their documentation and verification of vendor forms. This process shortens the route of the collected documents, which were initially submitted, to construction site offices at Nandoni Dam, transferred to Tzaneen before finally reaching the Pretoria offices,” said Mahlobo.

A Nandoni Task Team Committee had also been formed to help fast-track the process, which consist of two representatives from each affected village. “The department has already received the list of representatives endorsed by the respective traditional leaders,” Mahlobo said.

The Deputy Minister has also committed to set up a high-level structure that will oversee the implementation of the Public Protector’s remedial actions and to address other matters that cannot be addressed by the Nandoni Task Team committee.