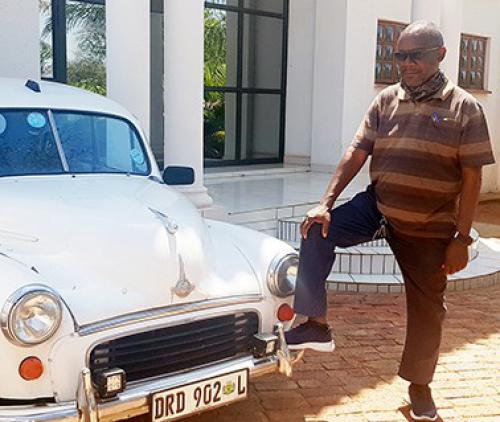 Moses Matshivha with his 1954 model Morris that he bought 40 years ago.

For some people, an old car may sound like a bag of problems and a bit of an embarrassment, but not for Moses Matshivha. This resident of Musina is very proud of his 1954 Morris Minor, and he reckons the vehicle is still as reliable as when it rolled off the factory floor 66 years ago.

When the Morris Minor made its debut in 1948 at the Earls Court motor show in London, it was sure to be a hit among motor enthusiasts. The design was classic, and it came in at a very affordable £382, including taxes. The 918cc engine was not what one would describe as powerful but was powerful enough to propel the car to a claimed top speed of almost 59 mp/h (about 95km/h). When production of these cars stopped in 1972, more than 1,6 million had been manufactured.

Matshivha’s 1954 model is a Series II and originally had an Austin 803cc engine, which was more powerful than the older engine, albeit slightly smaller.  The engine, unfortunately, did not stand the test of time and had to make way for a 1200 Datsun engine. “Apart from the engine modification, everything remains original because I did not want to spoil its originality. I now jokingly call it Morrisun because it is a mixture of the Morris and the Datsun. As a person who loves music, I have also installed a medium-sized sound system to make my trips interesting whenever I travel,” said Matshivha.

He bought the car in 1980 and, after four decades, this is still his vehicle of choice to drive around. He even uses the car on long trips such as going to Johannesburg. “Although I own other, modern cars, this is the one I prefer most because it is very powerful, especially going up hills. I enjoy the hooting and surprised looks from fellow drivers when I overtake their modern cars on highways.”

Matshivha said that he avoided travelling with the car to attend social gatherings such as weddings. “Many people approach me to hire out the car for their public events, but I don’t prefer it. I feel like a part of my body has been removed from me if the car is not around me. I remember one day, 20 years ago, when I travelled with it to a wedding around Thohoyandou. After the church service, the bride and the groom refused to board their hired car and they insisted on travelling with my vintage car to the photo-shooting venue. I had no other alternative but to take them along because I didn’t want to spoil their big day.”

He said another interesting challenge was that when he drove to shopping malls, he would be forced to spend extended time in the parking bays because every shopper wanted a picture with his vintage car. “At times I would tell myself that I would only spend a few minutes at the mall. But when I come out from the shops, I find people converging around my car for pictures. I find it inhumane to leave while people are still enjoying taking pictures around my car. I just humbly request them to be faster because I always have other things to do.”