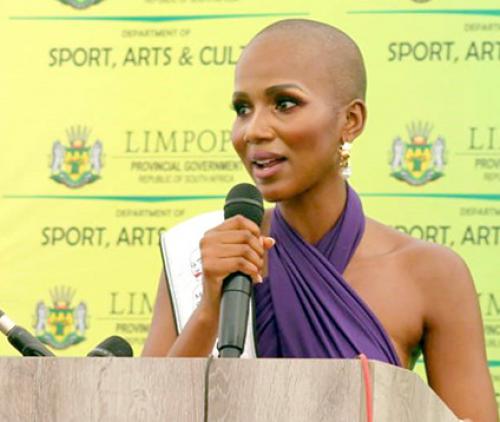 The newly crowned Miss SA said she was passionate about tackling mental-health issues and was committed to spreading the message. She said she would use her time as Miss SA to raise awareness about mental health. “As I stand here, I see MEC Dr Phophi Ramathuba, many traditional leaders, the executive mayor, various councillors, the community, friends and family members. Thank you for your presence. I see it as a commitment to my course for change, my course of mental health. It is something that, especially in rural communities, is a taboo conversation. We often engage in it, not to rehabilitate our society, but rather to shame, and I believe that now is the time for that to change and it starts with us as representatives of people on a public platform to bring about change.”

“I am your Miss South Africa 2020. It’s finally sinking in. Thank you so much to everyone for your love and support. It took an entire village to get me here, and I stand on a mountain of prayers. I love you all so much,” said Musida. “I stand here as an advocate for educational and economic empowerment of women and children’s mental-health awareness. I am honoured to be an ambassador of this beautiful nation.”

MEC Ramathuba said that Musida’s strong leadership qualities demonstrated that she would be a sterling ambassador for the youth, given the current persistent scourge of gender-based violence and femicide (GBVF) in the country.

“The department believes that mental health is strongly linked to gender-based violence and femicide,” said Ramathuba, adding that she would like to enlist Miss SA 2020 to collaborate with the department in the fight against GBVF. “We have a responsibility not to fold our arms while we are witnesses to moral degeneration. The youth are the ones who bear the brunt of moral decay. They are often perceived as agents of immoral behaviour or helpless victims who need some external intervention. They themselves decry the lack of role models and opportunities for right living. We need strong interventions with the youth to break this cycle,” she said.

Ramathuba called on all South Africans to make interventions in their own spaces to respond to the scourge of gender-based violence and femicide as a society. “Ambassadors like Miss South Africa are very important in addressing behavioural change that is needed to end the killing of women and children,” she added.

Chief Livhuwani Matsila, who supported Musida’s campaign, said that her hard work had already inspired many young people from the rural villages. “Musida’s victory is a thrilling experience for us.” He said that he was delighted when she had won the title. “She is our daughter. She has made us better people as a nation. Then I told you, she is here, we sent her. Now that she’s back, please support her on all social media platforms and all other efforts. We are very proud that a Venda girl, one of our own products of the village, is Miss South Africa,” he said. “We are happy she is killing it. Venda is killing it. We are very proud of her.” Matsila said living in a time where people coexisted with this level of excellence was awe inspiring. “Shudufhadzo is exemplary to the youth of South Africa and the world. She is the epitome of the quality of youth leadership that the country and world deserve. We wish her all the best on her journey.”

“As a family, we are exceptionally proud of having raised a young girl of Shudufhadzo’s calibre,” said the family representative, Mr Nnditsheni Musida. “She is fearless and ambitious, hardworking, determined and destined for success against all odds. Shudufhadzo’s strong traits are her humbleness and down-to-earth character,” he said.