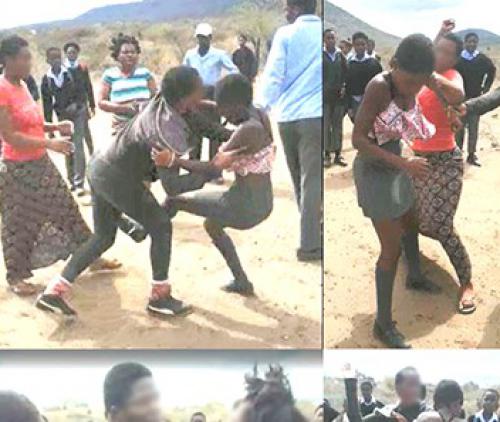 Clips from the video.

Four women have been arrested in connection with the assault of a 16-year-old school girl. The women, aged between 20 and 31, allegedly beat up the girl close to her school at Matsa village in Nzhelele. The girl was severely traumatized by the attack.

The incident apparently took place on 12 November. Video clips, presumably posted on the Internet by other pupils, show how the 16-year-old girl gets slapped and pushed around by the much bigger women. The girl, of slender build, is assaulted while bystanders seem to be watching and cheering. After a few minutes, a brave young boy tries to intervene and stop the attack. He puts himself in the line of the blows while trying to calm down the situation.

The girl, Maemu*, spoke to Limpopo Mirror this week, relating how the ordeal started. She said that she was attacked by the four women when she was on her way back from school. The incident took place near the school, with her classmates and other people watching.

Maemu said that another girl, Mukondi* (15), had started spreading malicious rumours three days before, telling everyone who cared to listen that Maemu was a “prostitute who slept with all boys at the school”.

“I tried to contain myself and refrain from entertaining her talk,” Maemu said. “But it got worse on Thursday, to the extent that I felt I should talk to her during break. But we had not finished talking when the break was over.”

Maemu said that she then approached Mukondi after school. “All I did was to try to find out if it was true that she was spreading lies about me and, if so, why she was doing it,” she said. “While I was still standing next to her, her mother and three other women materialised from nowhere and started attacking me. They didn’t give me any chance to explain what was happening.”

Maemu, who was attacked and had insults hurled at her in full view of many other pupils, said that she was struggling to regain her full composure and her self-confidence. “I was assaulted in front of my peers, most of whom are my classmates,” she said. “Now, when they see me, they whisper among themselves, look at me and burst into laughter. This is happening at a time when I am writing year-end exams, and I am now distressed. I feel like quitting school.”

Maemu only learnt later that when she was standing outside the schoolyard, speaking with Mukondi, a staff member at the school had called Mukondi’s mother, who then arrived with her three friends to assault her.

In the video clips, three women are seen attacking Maemu viciously while the bystanders look perplexed, seemingly not knowing what to do. The female attackers hurl insults at her, insinuating that she has no morals and is inexperienced in making love. In another video clip, the mother of the other pupil tugs at Maemu’s top and slaps her, asking what the school child has to do with sex, and pupils who are around cheer the mother.

However, one male pupil tries in vain to get between Maemu and her attackers, to rescue her from the angry women. “Leave her alone – no, no, no,” he says. “No, no. Leave her alone.”

However, the mother and two women tear Maemu from him and continue slapping and boxing her. “My child nearly quit school because this child is abusing her,” the mother says. Another woman adds that Mukondi comes back home every day, crying and complaining that she is being abused by Maemu.

All attempts to find Mukondi’s mother for comments proved fruitless.

Media inquiries were sent to the Department of Education’s Ms Tidimalo Chuene, who said that the department had psycho-social services that were offered in instances where learners were experiencing trauma, anxiety, and depression. “We also have an arrangement with the Department of Social Development on provision for social workers to deal with cases in schools,” she said. “In this instance, the District Director has undertaken to dispatch social workers to assist both learners and others who might be deemed relevant with counselling.”

Limpopo police’s spokesperson Col Moatshe Ngoepe said that the four women were arrested and appeared in court. They were released on warning and have to appear again on 10 December.

* Not their real names